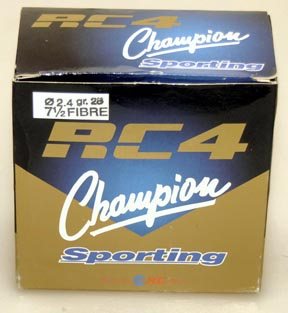 Pay a visit to any top level Trap or Olympic discipline competition and you’re more than likely to see most of the leading shots loading up with RC cartridges. Regarded by many as the ultimate loads when it comes to performance, whether they’re sponsored or have to pay for them themselves, RC tends to be the ammunition of choice. The blue and gold information rich carton hints at the RC4 Champion Sporting’s quality. You only have to pick up any box throughout the range and you’ll be able to itemise RC’s claims to fame as the company’s list of successes is proudly emblazoned on the side.

Each of the blue and gold cartridges is clearly overprinted leaving the user in no doubt as to what he or she is about to chamber. Manufactured from Cheddite cases each is exactly 55mm long inclusive of the deep 19mm RC stamped brass head. Sealed with a deep rolled six point crimp each cartridge contains on average 27-95 grams or 346 pellets of high antimony 7½’s with only the occasional mis-shape. A deep 15mm fibrewad and unusually broad 7mm over powder wad separates shot from the clearly defined green disc cut fast burn propellant and Cheddite primer. Construction wise, these RC’s are some of the best quality cartridges I’ve used of late.

Chronographed at 9ft the observed average velocity was a consistent 1,190 fps whilst patterned at 30 yards through ¼ choke resulted in a pellet count of 329 (95%) of the shot contained within the 29” plate. Combined distribution and speed confirmed the educated train of thought of high quality components combined with a slightly slower speed equal a more refined, consistent and reliable outcome. If these RC’s had a negative it’s that they did tend to generate some felt recoil even through the Marocchi A12 semi-auto.

Tested at Bond & Bywater’s evening ESP, the kills were clean and satisfying out to extended ranges although a fraction more lead was required on longer crossers. That said the physical report is short, sharp and predictable whilst the tendency for the spread to throw a 58% centre biased pattern ensures accurate shooters see their targets disintegrate into smoke. If you aren’t vaporising them it’s down to you - not the RC4’s.

Regarded by importer’s Shooting Star more as a fibrewad Trap load, the Champion Sporting, as its name suggests is suitable for most targets. Its ability to replicate performance, pattern and quality of kills also emphasises why numerous top shots opt for the RC4 Champion Sporting fibrewad when circumstances dictate, the end results - combined with feel – being virtually the exact same as their plaswad equivalents. The most obvious downside is the cost, approximately £5.50p per box of twenty-five, slightly less if bought by the thousand. The upside is a high quality load that delivers time after time to the exacting specifications that medal winning shooters look for.