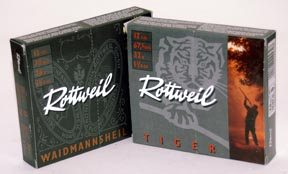 Anyone who’s ever hunted in Germany or mainland Europe can’t have failed to have come across Rottweil’s range of shotgun ammunition. Seriously well respected, Rottweil share equal billing within the RUAG Ammotec group with RWS.

Available through most gun shops and internet suppliers, but apart from outlets that have firm established orders you may have to both wait and/or order in reasonably substantial quantities. The reason being that there’s no way round the fact that Rottweil cartridges are expensive. Although around £3.50p and £4.50p per box might not sound pricey you’ve got to bear in mind you only get ten at a time.

Best known and most readily available on the UK market, Rottweil’s Tiger and Waidmannsheil game cartridges have been delivering clean long range kills for years. Unusually they also happen to both be plaswad loads, although the Waidmannsheil can be had in fibrewad and paper case if you source the ‘Pappe’ range. Both 2¾” cartridges, the pair come in extremely impressive and information rich cartons that, by snapping them in half along the perforations, present the shooter with two neat rows of five.

The Tiger comes in a bright red, high quality plastic case with equally intense yellow detailing that incorporates - as you might guess - a pouncing tiger. Conversely, the Waidmannsheil (pronounced Waidmanns Heil) or Hunter’s Congratulations utilises a similar black case decorated with Rottweil’s old Dynamit Nobel shields. Both share identical 21mm brass and a tight, deep, six-point crimp although the depth of the roll sees the Tiger a consistent 2mm shorter than the Waidmannsheil. Likewise, both have a deep four split plaswad with a single multi-facet cushion and overshot cup.

Filled with 32.19 grams of #5’s working out at an average of 201 pieces of well formed quality shot per Tiger, the 1.56 grams square and oblong green/grey propellant is precisely cut and loose. Likewise the Waidmannsheil has 291 or 35.20 grams of #6’s sitting above a charge of 1.72 grams of free running green-grey/silver oblong flake. Chronographed at ten feet through a ¼ choke, observed speeds over two random batches of five rounds produced an impressive consistency, the Tigers’ clocking an average of 1,226 fps, the Waidmannsheil 1,203 fps with neither exhibiting a fluctuation of more than ten fps.

As usual the cartridges were patterned at thirty yards through ¼ choke. Both the Tiger and Waidmannsheil placed 75% of shot contents within the full 29” circle of the plate. However, the Tiger concentrated 87% within the inner 15”, the Waidmannsheil just 61%. From this it’s more than fair to say that the Waidmannsheil’s more evenly distributed spread would suit the less accurate shooter, the Tiger being the ideal choice for those who can place their shot with greater exactness.

Utilised over an afternoon’s random pigeon and corvid shooting, both rounds performed extremely well, delivering solid but more than comfortable recoil combined with an overall feel of serious refinement. Both are high quality loads constructed from consistently high quality components, whilst the virtually unfailing performance reinforces why Rottweil are able to command the asking price whilst becoming the ammunition of choice for owners of German shotguns.