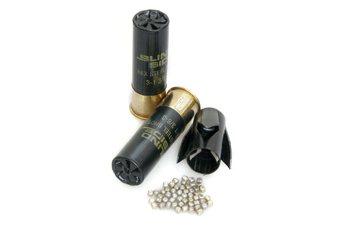 Designed especially for the wildfowler, Winchester’s new Elite Blind Side duck and goose load has taken some of FN Browning’s older technology and applied the theory to modern applications. Referred to as ‘Hex’ shot, each of the rounded edge cubes retains a far greater proportion of energy, the effect on the target being increased impact trauma and a far more lethal penetrative effect on vital organs, muscle and bones.

The concept of cubed shot whilst new in respect of its application in steel shot for wildfowling is to a degree a progression of the FN Legia rapid dispersion cubed shot loads. A confirmed favourite amongs French and Belgium shooters, the sharp edged square lead shot was designed for hare and rabbit shooting, the devastating effect seeing the conventional style cartridges used for a variety of other shooting purposes where a fast, no compromise kill was required. If there was a downside it was that the shot did at times produce something of a shredding effect as each piece of shot that impacted said hare or rabbit carved its way into the animal. Blind Side shot however has been able to retain all the positives of this type of shot whilst eliminating the negatives, the end result being one of the most effective non – toxic loads to enter the market.

Like all Winchester’s top loads the Blind Side is manufactured in the USA. Likewise the cartridges are presented in Winchester’s familiar information and explanation rich Elite style carton of black with red script, complete (in this case) with a flighting mallard and the ‘Ducks Unlimited’ sponsor’s logo, no shooter should be left in any doubt as to the exact purpose of these new cartridges and the type of shotgun they are intended for. Please do note though, shooting Blind Sides using any type of wad stripper chokes is not recommended, so stick with your gun manufacturer’s choke tubes with nothing tighter than ½ being fitted.

The tests shells were the 13/8 oz 3” versions filled with 3’s although 3½” cartridges are also available as are shot sizes 1 and 5. Each black case is over printed with bold yellow script and measure an exact 2½” in unfired form, ¾” of this made up by the deep brass coloured head. The six point crimp is fully sealed which after detonation expands the case length in this instance to an exact 3”, hence the cartridge length designation.

Internally, the shot sits neatly stacked in what Winchester refers to as their full length Diamond Cut Wad, the shot cup having three elongated diamond shaped slots cut into it. Its for this reason that wad stripper chokes should be avoided, these rhombus shaped petals slowly folding rearwards after exiting the muzzle once the shot has been safely sent on it’s way, the shot and cup ostensibly traveling as one along the barrel, the cup falling away once the shot string and pattern have started to develop.

Beneath the shot cup sits the Hinged Drylok Wad that covers the 2-44 grams of grey/black granulated powder, the term hinged referring to the compressible centre section that to a degree softens the effect of these powerful cartridges against the shooter.

All that remains is the shot itself; each 3” cartridge containing an average of 37-71 grams or 212 pieces of steel Hex shot. Uniform in appearance, shape and size with chamfered edges and corners, just as Winchester say, each piece of shot is neatly stacked and evenly spaced with its surrounding neighbours, the effect allowing for an increase of over 15% in the number of shot contained when compared to conventional round shot loads.

With a stated muzzle velocity of 1,400 fps a test batch of fifteen rounds shot at 10ft through ½ choke, the non – toxic equivalent of Full, a mean average speed of 1,291 was recorded whilst a 30 yard pattern resulted in an even, uniform spread with a 91% pellet count. To shoot the Blind Side are as might be expected punchy, the ideal weapon being one of the heavier, wildfowl orientated semi-automatics.

The powder burn is clean and fast whilst the general performance would indicate that these new Winchester shells are more than fit for purpose and a suitable addition to any duck or goose shooter’s inventory.

Its was only because wildfowl were out of season that this test wasn’t able to take in actual field tests, something that will be rectified as soon as possible, my past experiences with American made Winchester shotgun ammunition invariably producing some extremely spectacular results emphasising why this manufacturer’s range of hunting ammunition is as well respected as it is.

Price wise, top end non-toxic wildfowling loads don’t come cheap, the Blind Side being no exception. The 3” loads weigh in at £25 for a carton of 25 whilst the 3½” versions will set you back £29 for 25. The upside is Winchester’s new Blind Side is as near a one shot, one kill load so on a pro rata basis, these shells aren’t as expensive as they first may seem.

For more information on the full Blind Side range and the full selection of Winchester cartridges visit www.winchesterint.com GM