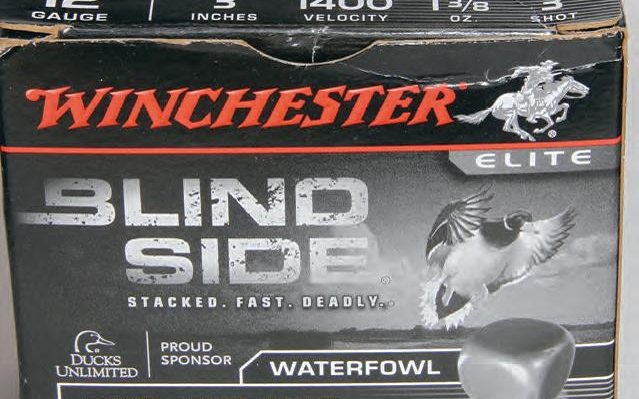 The Americans have been using leadfree or steel shot wildfowl shotgun ammunition for a long time. As such, they have developed their own thinking and ideas of what makes a better steel cartridge, especially for their beloved wildfowl or duck shooting. There is buffered shot, spreader wads, heavy steel loads and quite a few unusual, to us, shot types and shapes.

One cartridge, in particular, is the Winchester Blind Side (12-gauge), which forms part of the manufacturer’s Elite range of shotgun cartridges. The rationale behind the thinking of these loads is that because steel is lighter than lead, you need to increase the velocity to achieve the same effects as lead shot, especially so on tough wildfowl, which can be shot at longer ranges too. Also, these Blind Side cartridges use a flat-sided hexagonal/cubed shotgun pellet instead of the typical spherical lead shot and as such can be loaded more efficiently into the plastic wad. This allows more pellets per charge as there are fewer air spaces between pellets. It’s not a new idea, as square shot has been used before in loads from Europe, but these Blind Side 12-gauge cartridges have a velocity of 1400 fps and you can get a 1675 fps version too!

The case is a black colour with gold writing on the side and shows a high, 18mm brass head. You will also note, which is very typical of USA cartridges, that the sixstar crimp is welded tight. This is described by Winchester as a Drylok Super Steel System and it keeps the powder charge dry and the steel shot from rusting. Plus, it improves patterning and helps the cartridge produce consistent velocities.

When you open a cartridge up, you can see how uniform the hex shot is placed within the Diamond Cut Wad, so 100% of the available space is used up. This, according to Winchester, gives shooters more pellets on target and a larger kill zone, causing greater trauma for faster kills, due to the six-sided shape of the pellets as opposed to the traditional, round lead shot.

The Diamond Cut Wad is also designed to produce consistent, improved patterns for better or denser patterns of up to 25%, supposedly. The wad system actually consists of two components and the ‘over the powder wad’ is a concave disc on both sides that seals the bore and holds the main wad simultaneously.

The main wad is pretty interesting as it has three pointed petals that open in flight to slow it down. It is meant to stay with the shot up to 30 yards and then release, thus keeping the shot pattern tighter. The rationale behind this is that by retaining the shot for longer in the wad, the less ballistic coefficient cubed pellets will stay closer together for a better pattern. What happens if you hit a duck at 30 yards though!

I measured the individual steel hex shot at 2.6-grains (0.165-grams) each, which equates to a total pellet payload of 236 pellets by my reckoning. I did shoot these loads over a chronograph, which is always tricky with wadded ammunition, and I achieved an average of 1352 fps from the Browning’s 28” barrels, so not that far off the manufacturer’s quoted figures.

I wanted to use a semi or pump but none were to hand, so I shot the Browning Shadow with ¼ and ½ chokes to see the difference at 30 yards (my usual distance). I was expecting some tight groups from the wad that was supposed to hold the pellets out to 30 yards but found the peeled-back Diamond Cut wads at between 15 and 20 yards distance from the firing point.

With the ¼ choke in the bottom barrel, we had a slightly low pattern on the board, with only 132 of the original 236 hex pellets hitting it. They were distributed with 29 pellets within the 15” inner circle. There were a lot of holes. The remaining 103 pellets struck around the periphery. Not a good start for such a large capacity cartridge.

The patterns produced by the ½ choke were better. There were a total of 142 pellet strikes, only ten more, but the pattern was much better distributed. Now, we had a healthier 34 inner strikes, with holes still but more hits in the centre. The remaining 108 pellets were spread evenly around the 30” pattern board.

The recoil was noticeable and quite harsh, as you would expect. 38-grams in an over and under is about all I would like to shoot, and a semi would be far nicer. Also, increasing that velocity to make the lighter steel shot as effective as lead with retained terminal energy, means the pattern is more likely to spread more anyway, especially as the cubed shot is less aerodynamic, as stated earlier.

The crunch with these loads is that I was expecting better patterns to be honest, but the results are the results. I can’t see this Hex shot being any better than your normal, No. 3, 38-gram rounded steel shot. Also, you have to factor in the price of all American ammunition these days, and at £980 for a 1000 rounds, you have to make your own mind up. Very different from Winchester’s Ranger ammunition, which was completely different and shot superbly - just shows!