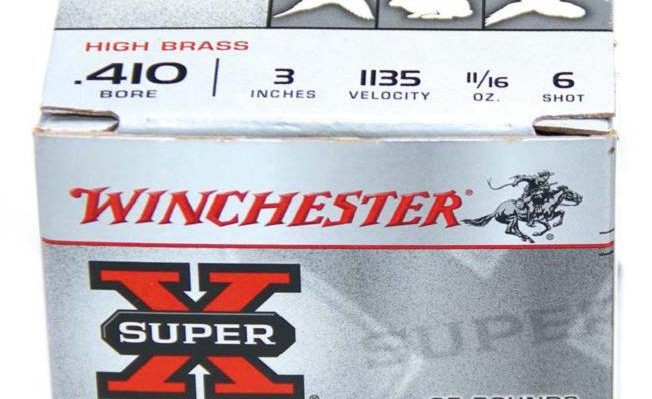 Small is always better in my book and when it comes to shotgun cartridges for vermin, the diminutive .410 has always appealed to me. The calibre is often underrated and misunderstood but when used at sensible ranges, with the correct gun and choke system, it can be all you need. Winchester has produced the Super X range of cartridges since 1922, so for 100 years! The Super X .410, 3” magnums are some of the best .410 cartridges available today, if not a little pricey at £698/1000 rounds, which is a lot. However, the magnums pack a real punch down range and produce excellent patterns to boot.

Winchester also make this round as a 2.5” version for older, shorter chambered guns too, as well as a bang-on-trend, high velocity steel shot version. I would like to try some of those.

This 3” cartridge on test is actually available in #4, 6, 7.5 and 8.5 shot sizes but only the #6 shot size is stocked, as they will be the most popular in the UK. However, with the success of the Eley #7.5 target load, I would have thought this size popular too?

This #6 shot size version is plastic wadded and uses a payload of 19.5-grams. It generates a velocity of 1135 FPS, compared to the steel shot version which produces 1400 FPS. That’s as big as you can get in a .410 case, offering a lot of pellets travelling down range. My son and I use 21- gram, 12-gauge cartridges for vermin, so in reality not a lot of difference and all travelling at the same speed. Still think .410s are for beginners?

Winchester uses a tough red polymer for the casings, which is a good thing on any .410 cartridge as the pressures are much higher than with other shotgun cartridges. You have the name, load data and case size printed in black letters along the case and the end is shallow crimped with the usual six-star crimp arrangement, with a very slight flare to the end. As with most 3”, .410 cartridges, the head is brass and 15mm high to control pressure and allow smooth loading, grip in the chamber on firing and then a controlled extraction.

Ignition is taken care of by the legendary 209 primers used by many manufacturers and reloaders alike. I for one like them in my .410 reloads. They produce a strong flame that lasts long enough to cleanly burn all of the powder content.

The spherical-type powder weighed in at 14.0 grains total. Looking down the Browning 425’s bores after testing, showed the barrels to be quite clean, with only a few unburnt powder balls and the usual lead pellet steaks emanating forward of the chamber area.

The stated velocity at the muzzle is 1135 FPS, and although testing shotgun velocities is always tricky, due to a long shot column confusing the light sensors of the chronograph, I did achieve an average reading of 1124 FPS from the ¾ choked Browning’s bore. Supersonic, so a sonic boom but still very quiet compared to a 12 or 20 bore.

To ensure the pellets are not deformed on firing from the initial primer ignition and then peak/spike of powder burn pressure, Winchester uses a one-piece plastic wad system. It is 1.5” long and encapsulates the soft lead shot for most of the case, with 0.41” of pellets touching the casing, but there is still a good degree of protection. The sides are cut longitudinally into three so that they spread instantly on firing to release what is a very long shot column of travelling #6 shot, that measures 1.65” in length. The rear section has a solid cup area and this stops the abrupt shove up the rear from the powder burn, plus prevents a lot of lead shot deformation and clumping happening in the first instance. It also helps reduce felt recoil.

The plastic wad also means that velocities are more consistent, as the rear cup section tends to seal the barrel better. Plus, the protection provided to the lead shot by plastic sidewalls helps with tight patterns.

When measured, the #6 pellets show a 2.82mm circumference and with that 19.5-gram (actual weighed was 19.45-grams) payload, there is a very good density versus knockdown power capability.

I used the Browning 425 Elite for testing, which is a lovely over and under .410 fitted with 28” barrels that are choked ¾ and full. I usually shoot .410 patterns at 25 yards and I tested both choke restrictions with the Super X load.

The bottom barrel with ¾ choke shot a really nice pattern down range, covering the whole board with a total of 146 pellet strikes. This was distributed with 79, #6 pellets hitting the outer 30” circumference and the remaining 67 pellets striking the 15” inner circle. A good spread between inner and outer sectors.

The full choke was next, and sometimes a tighter choke on a .410 can constrict the pellet column so that more filers occur, leading to a blown pattern. Here, we had a total of 143 pellet strikes, so three less than the more open ¾ choke, so a few must have hit each other and veered off course. However, the density was as expected, with far more inner hits - 92 strikes within 15”. Ouch! Plus, there were only 51 around the circumference, with a few blank sectors. That’s quite a tight pattern and demonstrates that the cartridges are likely to perform well at greater distances.

Yes, they are very expensive but look at the results. You have a .410 cartridge that produces good velocity, a very large .410 payload (you can’t get larger), combined with really even, consistent and dense patterns down range. Save up and buy a case! Forget about the money and enjoy the performance.