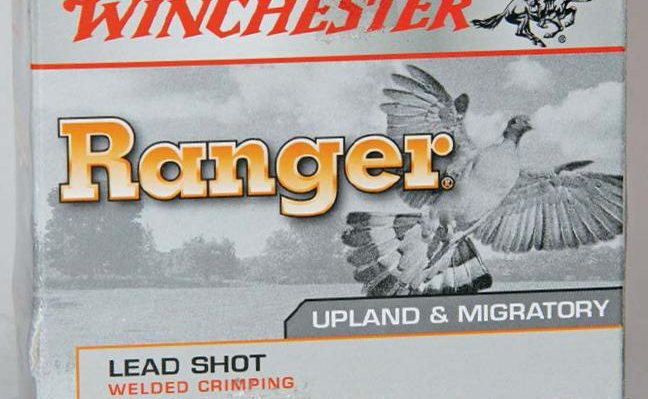 I like testing cartridges from America, as they have a very good pedigree for offering a wide range of products aimed at specific game species and ranges with alterative load setups within that genre. They are also usually quite “poky” and produce some very good patterns in testing and field use, I loved their .410, three inch shells that I reviewed recently. One drawback has always been the price as getting anything across the pond these days incurs a big surcharge.

Today the range of shotgun cartridges from Winchester called Ranger offers everything from pest control to law Enforcement slug rounds. But one offering that the UK importers bring in is the Ranger Upland and Migratory lead shot, a shell, which despite its name is well suited to British shotgun quarry.

Small migratory birds and upland game are its intended target, but really you have a 67mm cartridge with a plastic wad and 32 grams of No 7 lead shot. So, in reality like any other good 32 gram, No 7, pest or small game loading, but with Winchester’s high velocity and consistent performance that they are famed for.

So, what do you get? A very well formed, red plastic casing with a 12mm brass head and Winchester primer, obviously and the logo and all details of shot weight etc are printed on in black.

They also make a big thing about the welded closure of their cartridges and yes this does really help to stop moisture ingress into the casing and thus start to oxidise the lead or worse, dampen the powder.

Its six star crimp is well formed around this welded centre and also gives that necessary back pressure, essential, to produce correct powder burning. This is achieved by Winchester’s, double-based, flake-type propellant, which is made up of nitrocellulose and nitro-glycerine. This is combined with various coatings that makes the individual granules more water resistant, allows a more controlled burn and thus uniformity and can reduce muzzle flash dependent on barrel length and charge used.

This all results in very consistent and uniform velocities and thus excellent pattern properties down range. This is also true in any adverse climatic conditions, be that hot or cold, this powder still gives a uniform burn characteristics. The expanding gases are captured by a one piece plastic wad, with typical collapsible rear section and expanding cup which achieves a velocity of 390m/s or 1280 fps in old money, which is a nice blend of speed yet ability to keep a pattern uniform without blowing it.

Still with the wad, the frontal section is a full-length plastic cup with four petals that open when leaving the muzzle. Which fully surrounds its 32 gram payload, so less pellet clumping or damage on firing. You do have a choice of No 4 to No 8 shot sizes all in the 32 gram loadings, but this No 7 options is the only option the importers are stocking and is the most versatile. All-in-all, a very well made cartridge so lets see how she shoots.

I set up my usual pattern boards at 30 yards and decided to test the spreads from both ¼ and ½ choked barrels on the Browning Black Shadow 12 gauge. The targets show a 30” circumference with a 15” inner, all of which are segmented like the face of a clock, so you can count up the number of pellet strikes and not only visually the pattern but gain an insight into the distribution of the shot per sectors, biased up/down, left, or right.

The ¼ choke barrel printed a total of 267 pellet strikes on the board of which 170 were within the 30” circumference with a pretty good overall converge and no bias placement apart from a tad high. The inner 15” section had a healthy 97 hits quite evenly placed, with a few holes top and bottom, but nothing that game could slip through.

Now switching to the ½ choked barrel, we saw the ammo come alive with really good dense patterns. Total shot count was now 313 pellets, with a really good and even spread and great pattern density too. Around the circumference were now 165 strikes and the inner sectors now had a whopping 148 hits! These started right from the centre of the pattern and radiated out so there was no space for game or clay to hide. It’s not often you get a very good density right from the centre of the pattern board. Often you can have a void in the area that to me seems to be the most important point, this Ranger cartridge was smack on and true.

Felt recoil was decidedly mild, despite their generous payload with recoil manageable from some awkward positions, as you would expect from hide or roost shooting. Ejection was positive, no sticky cases and even after several boxes tested the bores of the Browning were remarkable clean and lead streak free, always a good sign.

Its one of those loads that despite its name as an Upland and Migratory bird cartridge, which is always a bit alarming, has some very good applications in the UK. For example, not only as a good woodcock or partridge load, but also as a walked up cartridge for fast close birds and it is just as capable for breaking clays.

For me there are two limiting factors; first and as with all Winchester shotgun ammunition, the price at £491 per 1000, so about £12.50 a box, even including discounts for volume is high. But if you are not a high volume shooter and appreciate good velocities and excellent pattern coverage, then a brick of Rangers might just be the ticket. Second and perhaps of more importance is the plastic wad, which are becoming more and more a no, no in the field and even on clay grounds. A look at the details, does not say if they are biodegradable or not!