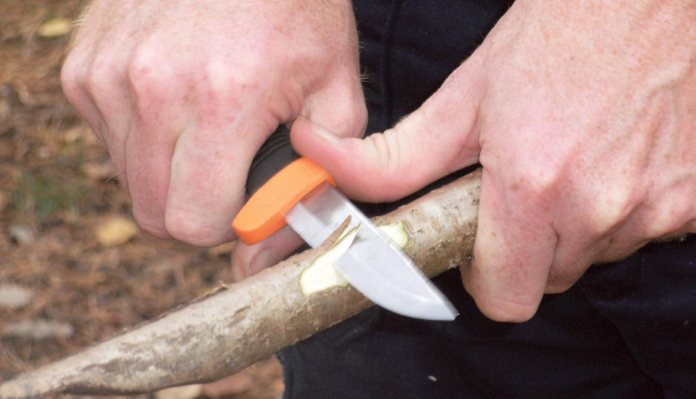 I have entitled this month’s bushcraft column ‘Safer Knife Usage’, not ‘Safe Knife Usage’, as no use of a razorsharp length of steel close to human flesh is going to be 100% risk-free. Accidents happen. Safer knife usage helps reduce this risk, but cannot eradicate it!

A knife generally comprises three main elements: A blade, a handle and a sheath. All three are important and the third – the sheath – is possibly the most important. The blade lives in the sheath at all times when not actually being used. It is not left jammed into a log, left lying on a table, floor or seat, where an unthinking person may brush against it, step on, or even sit on it. It lives in its sheath!

A sharp blade is a safe blade. One reason for this is, you are forced, by the knowledge that the blade is lethally sharp, to give it the respect it deserves, and another is that a sharp blade cuts cleanly, holds less crud to turn a wound septic in a hurry, and a clean wound heals faster, leaves less of a scar and – in my experience – hurts less. And, yes, for the record, I have done stupid things and carry the scars as reminders of how stupid I was. Learn from my mistakes, not your own – it will be less painful and embarrassing for you that way.

When a person picks up a cutting tool such as a knife (and by knife I include billhooks, machetes, slashers etc.) there are four main elements involved; a blade of sharp steel, a handle of some comfortable materials such as wood, rubber or synthetic polymer, a sheath of leather, wood, plastic or such, and the pinkish soft and squidgy thing containing various essential fluids that is called ‘a person.

As we have seen, the blade lives in the sheath when not in use, while the blade is the bit that does the cutting. The handle is the ‘safe’ bit for the soft squidgy thing to touch. Do not touch the sharp ‘blade’ bit!

Chip or roll the edge of a knife on loan to you and the loss of fluid, pain and embarrassment of ‘cutting yourself’ may be the least of your worries!

For most bushcraft tasks, I prefer a fixed blade, single-edge, ‘drop point’ knife, with a handle that has a small single-edged ‘guard’ or no guard at all. I like a contoured handle that is not so polished that it gives no grip if wet or slimy, and is lightly shaped to the hand. A shaped grip allows you to know how it is held and where the cutting edge is, while a big guard gets in the way of many cuts you will want to make.

When removing the knife from its sheath, do not wrap the fingers of your free hand around the sheath. It has been known for the edge to slice through a sheath as the knife is drawn. Assuming you are right-handed, release all closures on the sheath that hold the knife in place (many sheaths have no such closures and hold the knife by friction alone), and take hold of the handle with your right hand. If the knife is held well by the sheath, you may want to hold the sheath with your left hand, but do so it in such a way that if the edge does slice through, your fingers are not the next thing in its way! Always ensure that as the blade clears the sheath, nothing you do not want cut is in its path – clothing, closure straps from the sheath, belt pouches etc., as well as soft squidgy flesh – they are all too expensive to randomly slash apart.

Before you start cutting, you want to be sure that you are in a stable position, where any slips will not turn into accidents. If you are sitting, rest your elbows on your knees, so that the blade is beyond cutting your legs, or cut to one side of your legs. If you are standing, make sure you are in a secure position and will not fall over! In either position, check that nobody can come into range of your blade and that there is nothing around you to snag your body and make a cut go dangerously wrong, and nothing you do not want to cut is in range of the blade. Controlled cuts are the order of the day; wild slices are a waste of energy and potentially dangerous.

Sometimes, it is better to hold the knife still and move the workpiece, rather than the instinctive opposite of holding the workpiece solid and moving the knife.

This is like sharpening a pencil. Using a forehand grip, lay the blade onto the wood at a steeper than 90% angle, with the side of the blade almost lying flat on the work-piece, and the cut is made from the base of the blade to the top.

This cut gives a cut across the fibres of a wooden stick and is used to give a sharp ‘shoulder’ or undercut to a cut, as in making a tent peg etc. Using a forehand grip, lay the blade onto the wood at a steep angle and press straight into the work-piece. Much as the edge of a chisel is used.

A real power cut! Using a backhand grip, place the blade on the wood as for a slice, but with the knife hand and hand supporting the work-piece locked onto your chest with shoulders forward and elbows raised. The cut is made not by moving the hands but by pulling your shoulders back using your back muscles.

A really controlled cut, using a forehand grip as for the ‘slice’, but with the hand holding the workpiece giving the cutting power by pushing the back of the blade or guard. The knifeholding hand does little more than control the blade position.

A power cut with assistance – and the most likely way to break a knife! Batoning can be used to split wood along the grain or to chisel cut across the grain. The knife edge is laid onto the work-piece and the back of the blade tapped with a piece of wood. If splitting a piece of wood, then once the back of the blade is buried in the wood, you tap the tip of the wood sticking out of the work-piece. If you are having to tap hard, it is best to have the knife positioned so that the work-piece is close to the guard. Over-hard batoning can break a knife! Once you have a small split, remove the knife, carve a wedge and use that to finish splitting the wood.

Hopefully, using these basic cuts and basic safety advice, you will learn to carve and use a knife in a safer way, and avoid nasty accidents.