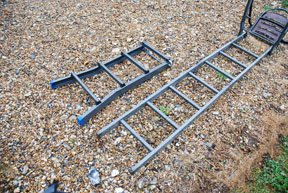 In 2007 Bushwear made to my mind a highly practical folding high seat – the Panther. Light and truly man-portable the design took the form of a folding ladder with an integral seat, shooting rail and most practical attachment/securing system.

I have one in my hunting gear and though I don’t use it a lot, as my land has a wealth of fixed high seats, there are times when what it offers is perfect. Last year it was some muntjac in an area that I did not use, so the ability to literally walk in with the Panther and put it up in about two minutes gave me a safe and secure elevated shooting position.

This year it’s first outing was for some foxes who were causing trouble around a breeding pen, which had been erected as to make the fixed seat in the same field useless, due to the way it was facing.

Made of aluminium alloy with a green finish, the Panther is simple to use; you just open out the ladder sections and fold them straight where they automatically lock, then deploy the seat assembly. Then swing the whole thing up against a convenient tree with the teeth of the securing bracket facing into the trunk. Now take the integral cord and pass it around the tree and secure it in the self-tightening cleat and everything is safe and sound. Finally climb up and adjust the shooting rail and you’re done. My one niggle is that the rail is a bit bouncy and could do with a forward support to make it solid. All that means is it flexes a bit too much, so you have to be careful in the aim. I use a double, V-ended stick for the job, but it would be good to see Bushwear address this with a purpose-made modification.

Generally the Panther will get you about 10 feet off the ground, which is acceptable. However, Bushwear now offer a ladder extension to increase this distance called the Cub. This has been done as many users felt it was a bit too low and I have to say that the option of the Cub really does make the Panther far more versatile. As there are times when 10 feet is enough and others when a bit more would be a blessing.

It is said that the best ideas are simple and the Cub is no exception. It consists of a 39” aluminium extension with U-section sides that slide over the existing ladder legs. With non-slip rungs and a wide base with plastic feet the unit is height adjustable and locks into position by sprung, U-shaped plungers that engage with the hole in the tubular rungs of the main ladder.

The Cub uses the first three rungs of the main ladder and gives around 30” of adjustment, its wider base makes for greater stability too. Like the Panther it’s quick and easy to assemble and in truth the weight increase is marginal, so keeping the design’s ability to be easily carried into position single handed.

There’s little doubt the Panther is a most practical design and truly portable too, the addition of the Cub makes it so much more versatile in terms of deployment. The price is also good too and if you’re considering the Panther then capitalise on your postage and treat yourself to the Cub at the same time; you won’t regret it. Good kit!