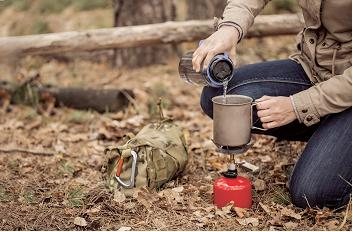 Many bushcrafters like to carry a small stove – either as a back up to using an open fire, or as their primary cooking option. A new little cooker on the market is the Fire Dragon Multi-Fuel Cooker from BCB. This diminutive stove measures only approximately 11.5 x 7.5 x 2.5cm and folds out to a max 13.75 x 7.5 x 5.75cm, with multiple angles possible between closed and fully open, and it weighs only about 156g. Inside the robust, steel built cooker is a ‘fuel receiver’ section sized to take the Fire Dragon solid fuel blocks, and the cooker comes complete with a clip-on windshield, shaped to allow the cooker to be deployed to take a Crusader mug or similar container.

The Fire Dragon can be used with solid fuel blocks, gel fuels and some liquid fuels (not petrol), but is primarily designed to use the Fire Dragon solid fuel. Three fuel blocks will fit inside the cooker for transportation. The Fire Dragon solid fuel is a waterproof block that has potential as a hand sanitizer, as it is made from an odourless, non-toxic, UK sourced ethanol. Lighting easily from even the sparks from the Ferro rod and burning cleanly (leaving little soot), this environmentally friendly fuel comes in 27g blocks, individually sealed in foil-topped plastic tubs, which burn for an average of eight minutes each.

In my tests, a single block of the fuel in the Fire Dragon cooker with the windshield fitted, managed to bring 0.5-litres of water from cold to boiling using a Crusader cup without a lid. The weather was cold with light winds. BCB have won a four-year contract to supply the Fire Dragon Multi Cooker and Fire Dragon solid fuel to the MOD, and bushcrafters may well find the combination ideal for their needs too.

The Fire Dragon Multi Fuel Cooker costs around £1.50 on its own, while the fuel costs around £3 for a box of six blocks – which is a recommended amount for one full day’s use. A kit is also available that has a folding stove, three fuel blocks and a flint and striker for £8.