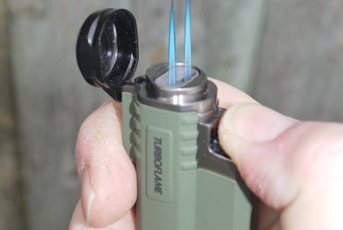 There are petrol lighters, there are gas lighters, and then there are TurboFlames! These ‘super lighters’ have been around for quite some time now, and have more than proved their worth in the field. Now we’ve been trying the TurboFlame Ranger Turbo 2 Lighter, which as its name suggests has two burner/jets and seems even better than the original – certainly for more difficult outdoor applications.

The Ranger’s twin jet/burners use a shielded platinum catalyser coil element to maintain a constant ﬂ ame which burns at temperatures of up to 1300°C, taking it into a whole new level of creating instant fire. These two fully-adjustable blowtorch-like ﬂ ames are wind and weather resistant, allowing you to create fire in any conditions. These jets also allow you to use the lighter at any angle, even upside-down. The power and intensity of the burners allow you to light HEXI blocks in seconds, cut and seal para-rope, solder metal joints, fuse some wire joints, heat seized bolts, thaw frozen locks, melt p-tex, repair minor cracks in some boards/canoes, etc. The TurboFlame will also work at altitudes up to 3000 metres.

A useful gas-level indicator is situated on either side of the lighter body, meaning that you should never unknowingly run out of gas when you need it most.

A black dust cover/cap keeps the ﬂ ame/ignition area free from dirt and debris when not in use. To use, you just ﬂ ip back the dust cap and push the button on the side of the lighter; this opens the twin gas burners and activates the piezo electronic ignition, giving two high pressure ﬂ ames. The power of each ﬂ ame itself is enough to safeguard against being extinguished by wind, and the dust cover can also aid as a mini windshield.

A useful moulded-in fastening hoop on the body allows for attaching a lanyard, key-chain or carabineer for keeping the lighter close to hand.

The Ranger runs on standard butane gas and is recharged like a normal gas lighter by pushing the bayonet/nozzle fitting on a gas cylinder into the filler valve at the base of the lighter.

The Turbo Flame Ranger is an ideal windproof lighter for any outdoor enthusiast, and an absolute must for any survival kit. The TurboFlame Ranger Turbo 2 Lighter is priced at around £10-£12. Find your local stockist on 0161 428 1077 or visit www.turboﬂ ame.co.uk