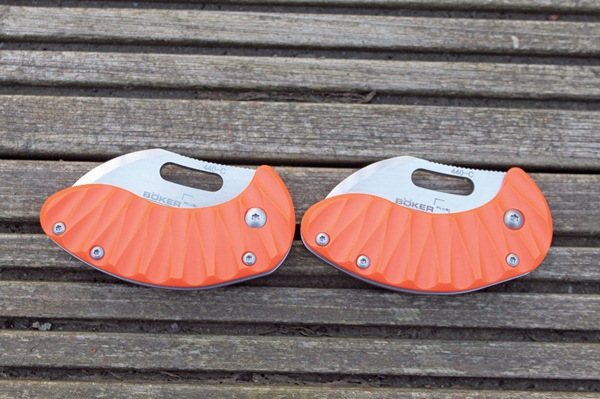 It’s tough to choose the best UK Every Day Carry (EDC) knife, they all usually conform to the same basic specification and have a folding blade, which is 7.62cm in length (three inches) or shorter. This specification is dictated by our laws on what type and size of knife we can carry, although, remember, you still have to prove you have a legitimate reason to carry a legal sized non-locking EDC knife in the UK, wherever you are.

Boker are prolific makers of knives and their Plus range has some very interesting stuff. The Nano is part of the Boker Plus range and has been designed by David Curtiss. It is a strikingly different design but when handled the ergonomics are undeniable. It is also interesting from a UK point of view as it can be bought in a locking (Nano) and non-locking (Nano 42) blade for the UK.

The Nano is a folder with a fibre reinforced scale on one side and a pocket clip on the other. Depending upon the owner’s choice, the pocket clip can be positioned on either end of the knife by removing two T6 Trox headed screws. The single scale on the left-hand side of the knife has a tapered grooved pattern, which is very comfortable in the hand. The grip scales come in three colours: black, the now very fashionable Zombie green or bright orange as seen here.

The UK legal EDC version is called the 42. The blade is made out of 440 grade stainless steel and the rest of the metalwork has a satin finish. The blade is 48mm long with a groove machined into the spine for one-handed opening.

There is a pronounced 30mm ribbed section to the spine of the 3mm thick blade. The blade locking version of the Nano utilises a frame lock system. Instead of a regular liner/frame lock, the non-locking Nano 42 has a tiny hemi-spherical lug on a sprung section of the frame which engages with one of three matching dimples on the blade tang – the first holds the blade in the closed position, the second lightly engages when the blade is swung through to approximately the 135° position and the third engages more solidly when the knife is fully open. This simple detent system holds the blade firmly, even when used for some quite tough cutting tasks. In use, if the blade does begin to close on the 42, it does not place the sharpened section of the blade on the index finger of the user. The choil section of the blade merely presses up against the finger.

The Answer to Life…

Comparing the two versions of the Nano side by side and using them both for a few weeks, I found I actually much preferred the 42 legal UK carry. It never felt unsafe in use and was much quicker and easier to use than the locking one. In fact I made it my EDC by fitting a paracord lanyard with an Atwood Ghost mini pry bar/ bottle opener to the other end.

Overall, the Nano is a brilliant design available in two configurations depending upon your preference. The Nano 42 version is the cheapest at £23.95, with the locking Nano Zombie being the most expensive at £41.95. I can now see why the Nano 42 is becoming a very popular UK legal Every Day Carry.