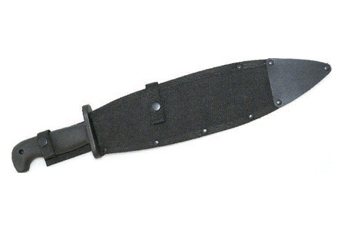 Following on in their recreation of historically significant knives, Cold Steel has now introduced the famous Smatchet. This oversize knife was designed by British Army officer W.E. Fairbairn who, along with E.A. Sykes, had conceived and developed the original Fairbairn-Sykes stiletto.

The Smatchet was a cross between a short sword, machete and a bolo, and designed to be more of an ‘all-round’ tool than the combat only FS ‘commaando’ knife. Claimed to be based on the the Royal Welch Fusiliers WWI trench knife, the Smatchet was also used by members of the OSS and in later years the SAS along with a variety of civilian users.

Also known as the Applegate-Fairbairn Smatchet, because of the design input by US Col. Rex Applegate, this tool has been recreated many times in the past. As useful as a large cutting knife as it is for hacking, thinning brush and vegetation or for driving in pegs courtesy of the oversized pommel, the Smatchet is as convenient and practical today as it was over sixty years ago when the knife was first produced.

Cold Steel’s version weighs 23oz and measuring 19¾” in overall length, the leaf shaped flat ground blade has been constructed from 1055 carbon steel, is 14” long and coated with a matte, rust resistant finish. A keen cutting edge runs along the entirety of the bottom of the blade whilst a shorter cutting surface runs from the tip for about a third of the upper edge of the blade.

Now made using modern materials, the full tang blade culminates in a moulded 5¾” long polypropylene handle that incorporates a wide guard. A good hand filling design and offering a good secure grip, there’s also the facility to fit a lanyard, a fixture that was always included in the originals; Fairbairn suggested that the Smatchet was never used without being secured to the user’s wrist.

Centrally balanced, the Cold Steel Smatchet will more than prove its worth around any shoot as a tool on hand to clear branches and scrub or reapply a npoint to a fence post, big jobs or little jobs, the weight and heft providing excellent control. And given the keenness of the cutting edges, the Smatchet will more than prove its worth as a large utility knife.

The only part of Cold Steel’s Smatchet that hasn’t been modeled on the original is the sheath. Manufactured from Cor-Ex, a type of ballistic nylon that’ll give the user years of service, metal reinforcement protects the lower section whilst two press stud loops keep the Smatchet contained within. A large belt loop will ensure the Smatchet remains attached to your belt.

Retailing at £32.40p, the Smatchet is a nice little piece of recreated history that can be usefully used around camp. For more information or to order, contact B A Blades on 0800 862 0411 or visit www.blades.co.uk