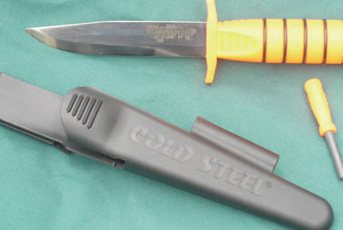 When I was given the Cold Steel Survival Edge knife to test, at first glance it looked a little cheap, but on closer examination it’s actually rather a clever and practical design.

The most striking feature is obviously the bright orange plastic handle; garish it may be, but in a real survival situation it would be a useful feature - nobody wants to lose their knife, especially if your life depends on it.

The Polypropylene handle is hollow and has a screw off end cap; it may seem a little bit ‘Rambo’ but it’s ideal for storing tinder, para-cord, a fishing/sewing kit – even spare batteries! As it’s sealed by an O-ring, it’s completely watertight, so anything placed inside will remain dry. The cavity is an inch in diameter and 3 ¾” deep, so it’s got quite a capacity and it’s up to the purchaser as to what they fill it up with!

In a life or death situation a pole could be inserted to make a spear/harpoon and secured by lashing para cord or twine around the double quillion hand guard. More O-rings are found on the handle and they provide a secure hold, even when the knife is used in the wet. The hollow handle does make the knife look a little weak but the blade’s tang goes about an inch into the plastic and is plenty strong enough. I’ve seen a real torture test online, where the blade is placed in a vice and bent to ridiculous angles without snapping the blade or damaging the handle.

This obviously brings us onto the cutting part of the knife and it is razor sharp from the box and I’m looking at a rather large bald patch on my forearm to prove it! The German Krupp 4116 stainless steel clip point blade is 5” long and 1/8” thick and 1” wide. The overall length of the Survival Edge is 9 ¼” and it weighs a miniscule 3 ounces. It’s therefore light enough to carry without even realising it, yet still durable enough for serious tasks.

The Secure-Ex sheath is a one-piece unit made from an extremely strong plastic and holds the knife securely in place by gripping the quillions on either side of the handle. The knife won’t come out unless it’s deliberately pulled out and it’s best to flex the front of the sheath with your thumb as you do so. A small pouch is moulded into the side of the sheath which holds a 1 ½” Ferrocerium fire steel with a handle made from the same orange polypropylene as the knife. I used a small piece of cotton wool as tinder and soon got a fire going by scraping the fire steel with the back of the blade and it only took a single spark. There are drain holes in both parts of the sheath, so any water ingress will just flow out of the bottom.

I tested the knife to see how well it would cope with some normal cutting tasks; it made light work of some small cherry branches, I then used it to feather some smaller, drier twigs to act as kindling. The knife didn’t feel at all flimsy, despite my earlier reservations and I’m sure it would take some real abuse to damage it. I later peeled a prepped a load of cooking apples and it worked perfectly, with the blade seemingly as sharp as it was originally. If the blade does become a little dull after extended use, the angle of the grind makes it a doddle to sharpen on a stone.

Don’t be put off by the Cold Steel Survival Edges garish and possibly ‘budget’ looks, it’s well up to the job and won’t break the bank at only £36. For stockists contact the UK distributors, Bear-Arm Ltd on 0800 862 0411 or visit their website at www.coldsteel-uk.com