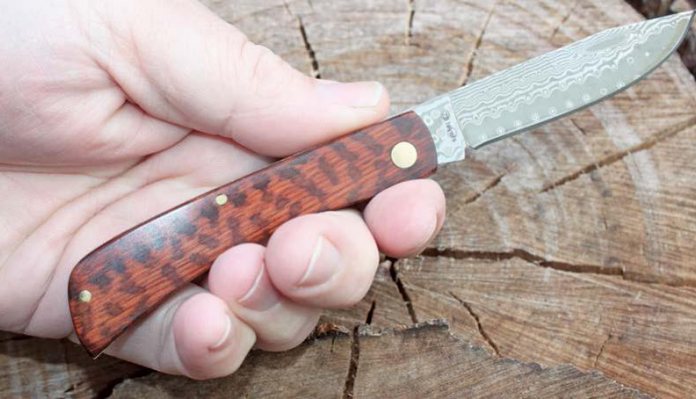 Boker has a knack of coming up with brilliant UK legal carry folding knives and, in this case, a very beautiful one. For Boker, the Magnum line is their budget range, but that’s not to say they are cheap and nasty, far, far from it. The concept takes place in Solingen the traditional home of Boker, then the design, construction and finishing in are done in Asia, at the same overall quality, but to suit the more frugal knife enthusiast.

The Rangebuster is Boker’s take on the classic workingman’s knife pattern, which is still very popular today. American farmers know it as Sodbuster, miners in Northern France call it Mineur, while workmen in Solingen named it Hippekniep. It’s a slipjoint non-locking pocketknife and the blade is less than 76.2mm long, making it a UK legal carry knife.

The Rangebuster comes in two versions, an Ebony scaled knife and a Snakewood version. The Snakewood looks stunning set against the brass fittings and the 73-layer Damascus steel blade. Yes, the Rangebuster has a Damascus blade. The single blade has the drop point design and flat ground blade of a Sodbuster, as well as a nail nick. I personally found I did not need the nail nick to open the knife at all. That’s not to say the back spring is too weak. It still feels very safe in use, it’s just easier to get a grip on the textured Damascus blade with the finger and thumb than use the nail nick.

It’s a very light carry knife which thanks to that layered blade, also looks truly looks stunning. As a gentleman’s daily carry folder it’s perfection, and at £46.95 it’s an absolute bargain. Try getting a Damascus bladed, Snakewood pocketknife anywhere else for less than 50 quid, believe me, you will struggle. The Ebony scaled knife is even cheaper at only £31.95. The deep rich black wood going very well with the Damascus blade. I’ll be adding both to my Everyday Carry that’s for darn sure as mustard. Get one while you can, they are sure to go fast.

Many thanks to Richard at HH for help in production of this article.