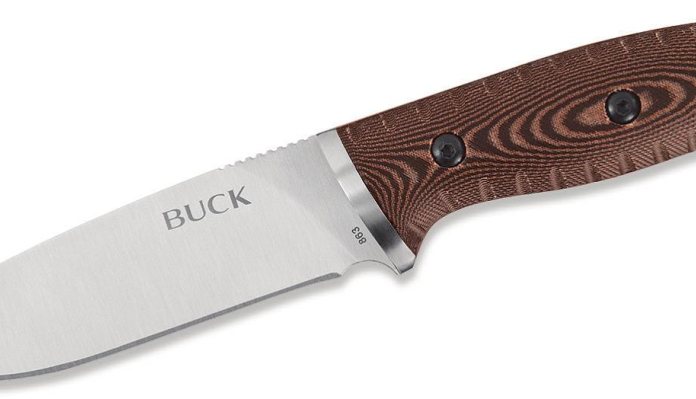 The Buck Selkirk Knife is a multifunctional survival knife that has added features to enhance its overall usefulness and survival attributes. It measures 9.5” in length and includes a 4.625”, 420HC stainless steel drop point blade. It weighs 7.6oz excluding the sheath and fire striker unit. The latter is a useful and effective, 2 ¼” long Ferrocerium striker with a whistle integrated into the grip. Cleverly and sensibly, both knife and striker (when not in use) are held in an injection moulded nylon sheath (supplied) that can be used/worn horizontally or vertically.

The knife features an attractive and ergonomic, brown/black colour, CNC contoured Micarta handle with steel bolsters. The butt/pommel can obviously be used as an improvised hammer but the full tang construction also adds to the integral strength of the blade. Talking of which, the 0.135” blade thickness is further evidence that this is a knife designed for heavy/ tough usage. Also, due to the spine ridging, choil and front bolster, combined with the well-sized ergonomic handle, it feels ultra-safe in the hold and when in use, it balances wonderfully well, adding to the overall secure feel and ease of use.

It’s worth noting that there’s a small folding lock liner version of the Selkirk. This features the same blade and handle design but in a smaller and more compact, portable package.