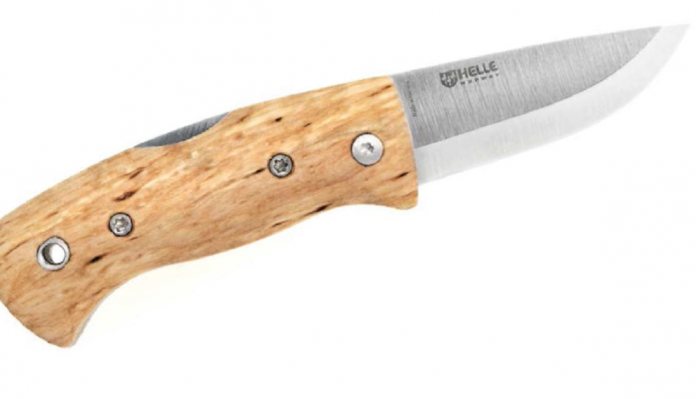 However, for quite some time they have also had a few folding lock back knives on their roster. Specifically, I refer to the Dokka and Bleja – two medium-sized general-purpose, strong, ergonomically designed and highly cosmetically appealing field knives.

Well you can now add a new name to that list with the release of their latest and smallest knife ever – this being the Helle Kletten. Like all knives in the company’s range the name of the model always means something in the manufacturer’s native language, and this, of course, is no exception.

What’s in a word

The Helle Kletten takes its name from the Norwegian word for a small mountain or a large hill. This is either very fitting or rather deceptive as the knife is incredibly small compared to their usual offerings. The Kletten has a 3.1-inch curly birch handle that holds a 2.2-inch Triple laminated stainless steel clip point blade and weighs a mere 3oz.

Despite its size the attractively grained and oiled handle is quite chunky and very well-formed making for a solid and secure platform from which to use the relatively thick strong blade that deploys with a single thumb nick. The knife, as expected, uses an incredibly secure lock back mechanism and the handle is blessed with the now familiar thick stainless-steel blade liners plus lanyard hole.

Size does not matter

Due to its size it’d be all too easy to class the Kletten as a novelty – but not so, because it’s ideal for those who pursue small game such as rabbit or wood pigeon, and is so strong in build it can still be used to carry out heavier duty work. Also, the Kletten is very compact when closed making it extremely easy to transport and carry. Indeed, as primarily an airgun hunter myself, I’ve found it to be very much in its element for all skinning gutting and preparation work needed to make the transition of quarry taken from the field to be presented on the plate.

It should also be noted, that as the knife is not a limited-edition model, clearly indicates the company fully realise its potential and usefulness. In fact, despite its diminutive dimensions, the Kletten undoubtedly has all the trademark Helle characteristics of form, function, practicality, and craftsmanship.

As with all Helle knives it comes extremely well packaged in a presentation box tube that includes the knife, large cleaning cloth embellished with the company logo and a long leather lanyard.