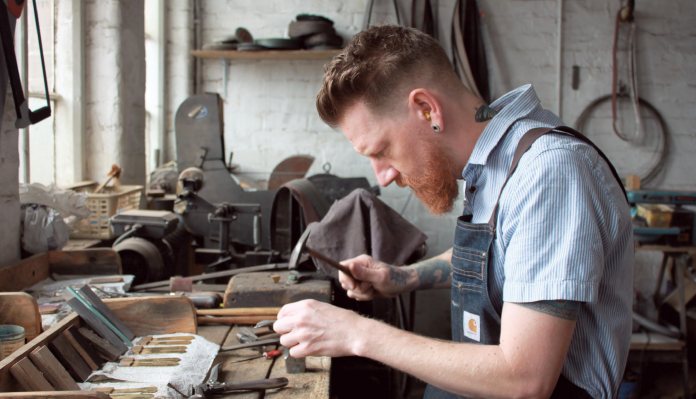 Contrary to popular belief, custom pocket knife making is not limited to just the one remaining maker, famous though Stan Shaw undoubtedly is. Since 2016, there is a new pocket knife maker in Sheffield and not just anywhere in Sheffield; he works out of the famous Portland Works.

Michael May didn’t set out to be a knife maker, although other family members had gone into the cutlery trade in Sheffield. After leaving music college, he began working for Taylors Eye Witness, a famous knife making firm in the city. He ended up in the pocket knife department, where he stayed for three-years, before leaving to go to university; after earning two degrees, he came back into knife making, getting his old job back at Taylors, making pocket knives again. Working under Keith Moorby there, he honed his skills and also came to an epiphany of sorts. He wanted to make knife making his career, he decided to set up on his own, to make the knives he loved to make; he chose Portland Works for his base, as it of course was a knife making factory and even now has the infrastructure and other skilled artisans to help him make his dream come true.

Here’s were fate stepped in; not long after getting his tiny workshop up and running, Trevor Ablett was in the process of retiring. Trevor was a worldrenowned Sheffield cutler and Michael bought all of his equipment and patterns. Very sadly, Trevor died not long after and Sheffield lost one of its truly great characters. As Michael says, it was a massive loss to the knife community, but a truly great legacy has been passed onto Michael and he is truly gratefully for the opportunity to carry on hand-making quality Sheffield pocket knives.

I knew nothing of Michael until I got talking to Jane at the Famous Sheffield Shop; they specialise in selling Sheffield made products, be it knives or pewter work. His picture hangs on the shop wall and they stock his signature knife, a beautiful Barlow pattern folder with Buffalo horn scales, a brass bolsters and liners. Added to this, is an exquisite turquoise coloured collar behind the bolster that really sets it apart; Michael also hand file works the back spring to a traditional pattern, the blade is D2 high carbon steel for wear resistance. It truly is a work of art.

I visited Michael at his Portland Works workshop, it’s right at the top of the building and straight away he told me that he was actually in the process of moving to a bigger workshop downstairs in the Portland Works building; he has outgrown his one room since starting there in 2016, is was cramped in there, but the natural light streaming through the windows gives Michael a great view over the fantastic building.

I couldn’t resist calling in on my old friend and master knife maker Stuart Mitchel, as Michel’s bench overlooks Stuart’s workshop. It was clear to me that Michael May was born to this, much as he admits he didn’t know how his life would end up. He has a clear passion for his work, I personally love his mind set to using local materials for as much of his work as possible. We got to talking knives, of course, and he told me of some walnut he had come across from a tree in Adwick near Doncaster. Being a Donny lad, and my parents were from Adwick, I asked him to make me a spear point knife with the Yorkshire Walnut scales. He also uses Yorkshire Oak, as well as Yew and even has used Elm, which is hard to come by. He also loves to use Buffalo horn and Rams horn. He even had a stave from a Jack Daniel’s oak barrel that someone had brought in to have him make a few knives from.

Another one of his knives caught my eye, a Damascus bladed folder, he explained that the folded steel came from the blacksmith at Portland Works; Joe Moore the blacksmith there made the steel into a flat bar, which he cuts out the knife blade pattern for his folders. Heat treating is also done at Portland Works. A true Damarcus Sheffield made pocket knife, he also uses C80 carbon steel, as well as D2 and stainless steel.

Michael doesn’t make batches of more than six knives at a time, that way he says he keeps the quality to the standard he wants. Lead time is currently four to six-weeks; he does take on custom orders, such as my spear point Yorkshire Walnut scaled knife, or the Jack Daniel’s stave scaled pocket knives.

Yes, Sheffield custom pocket knife making is alive and well and, in the hands of a craftsman like Michael May, it still has a long way to go. For more information, check out Michaels’ website: michaelmayknives.com.