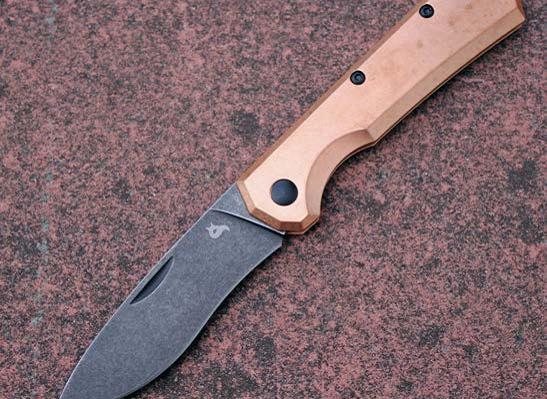 It’s not an easy task to choose the best UK, Everyday Carry (EDC) knife. They all usually conform to the same basic specification and show a folding and non-locking blade, which is 3” (7.62cm) in length or shorter. This specification is dictated by our laws on what type and size of knife we can carry. However, you still have to prove that you have a legitimate reason to carry a legal-sized, non-locking EDC knife in the UK.

The Black Fox Ciol was designed by Denis Simonutti and is a truly beautiful knife. The sweeping curve of the blade not only cuts well but looks pleasing to the eye. There are three configurations available and Heinnie Haynes carry all three, however, the copper scaled version is by far the coolest.

The 440c stainless steel blade is stonewashed to black and is complemented by black bolts holding the knife together. In the hand, the increased weight from the copper scales is noticeable. There is a nail nick on the left-hand side of the blade, but it’s easier to open the knife by just grabbing the blade with the left-hand thumb and forefinger. Being a legal slip joint knife, it requires two hands to open it and the blade stops at 90º, which is a feature that I like as I think it’s safer in operation.

The scales show a finger groove that puts your thumb onto the spine when you hold the knife and there’s also a 5mm diameter lanyard hole, which I always like to see on a pocket knife. Fitting a lanyard to the Ciol makes it easier to pull it out of your pocket. The copper scales will change colour and patina over time, and after just a week of carrying the Ciol, it began to develop a lovely colour. Black Fox gives you a black leather carry slip, which is useful as it protects the copper scales while you are carrying the knife.

The Ciol is also available with Zebra wood or Micarta (green or brown) grips. Choosing the latter means that the knife weighs in at only 45-grams, opposed to the copper scaled version, which comes in at 100-grams. Whichever version of it you go for, the design of the knife is both functional and beautiful.

Thanks to Richard at Heinnie Haynes for help in the production of this article.