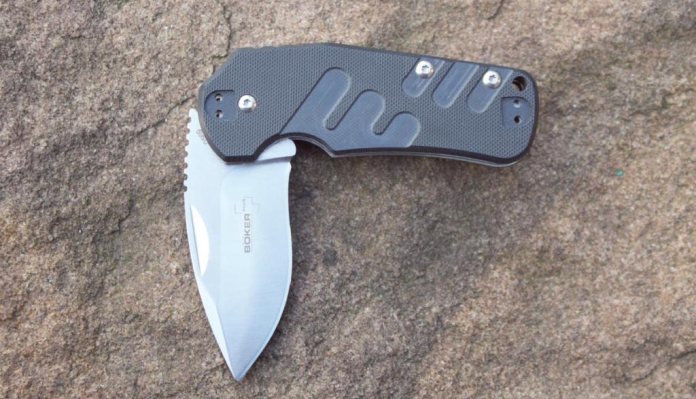 Boker know what they are doing when it comes to making UK legal carry folding knives and now there is a big trend in world legal folding knives. To make them world legal, there are in fact more restrictions imposed on them than the laws here in the UK. Less than 75mm blade, non-locking etc. The final part over and above the list of UK rules is not being able to open the knife with one hand. The so named Worldwide knife is designed by the well-known knife designer Chad Los Banos of Subcom fame. I loved his Boker Plus XS OD knife (apart from it did not have a lanyard hole) and this is another winner.

I was initially taken aback as to the sheer size of the folder. The blade is only 68mm long but the body is 104mm long, open it is 172mm long. It has a steel pocket clip and this has four, yes four, positions, tip up left side, tip up right side, tip down right side and of course tip down left side. Well, technically five as you could take it off and leave it in the box…

The AUS-8 stainless steel blade is a drop point hollow ground with a thumb nick on the left-hand side spine. The locking spring on the slip joint is very strong; it has to be, as the finger choil is not on the back of the blade where the finger rests in, it has an extra anti-closing mechanism, so there has to be as little chance as possible to close up on the fingers. At 90-degrees the blade locks out and needs more pressure to fully open out. It does need two hands to open the knife. It has removable black 3mm thick Zytel scales, a T6 and T8 Torx key is needed to remove the scales, I will be making my own in copper. The T6 screws on the pocket clip are easy to remove too, you can change the position of the clip as I did to a tip up. This puts the 5mm diameter lanyard hole to the top of the pocket, where I want it, I always fit lanyards with small pry tools on my EDC knife lanyards, a knife is for cutting, not prying stuff. The black, textured scales have an angled recessed slot pattern for extreme grip cut into them.

Speaking of grip, there are seven 2mm slots on the spine at the rear of the blade and another three 3mm slots cut into the body of the knife, you really cannot fault the ergonomics. The deep finger choil is 24mm in diameter too.

For the price, the knife is incredible value and its world-legal design (for most countries, please check specifically for where you are traveling to) means again that if you lose it, or have it confiscated, then you will not be too much out of pocket. Yet another great ‘real world’ carry knife from Boker Plus.

Many thanks again to Bruce and Ben at Heinnie Haynes.