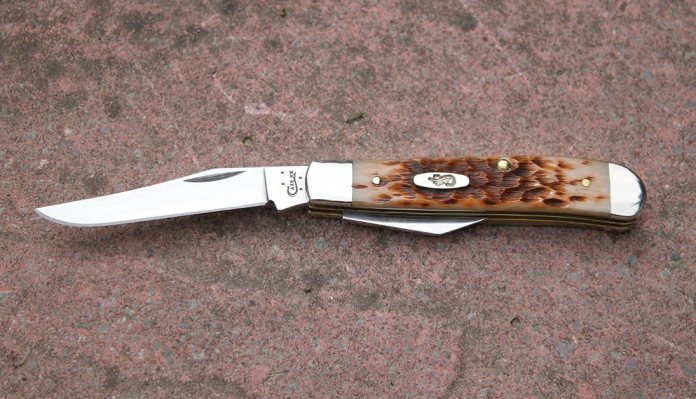 I did not own a Case knife until this article, which is very remiss of me as a self-confessed knife fan! W R Case and Sons have been making knives in the USA since 1889. They have a massive following and even a collector’s club with 19,000 members. Hennie Haynes carry a wide range of Case knives and the one that caught my eye was the Mini Trapper in amber bone. Not only does it look classy it has a non-locking blade under 75mm long, making it UK legal carry. To top that, it also has the other tool I need in my EDC – a bottle opener or ‘cap lifter’ as the Americans call them.

I was instantly impressed by the build-quality and materials of the Case, both the blade and cap lifter lock out first at 90-degrees; then snap fully open, with a satisfying clunk. The stainless steel, 63mm long blade of the knife is called ‘truesharp’ by Case. I can testify that it is sharp, sharper out of the box than a lot of brands I could mention. To be brutally honest, I was not a fan of the blade shape at all when I first saw the knife, it was not until I had carried it for a month that I became a fan. The seemingly odd raised section in the spine profile to accommodate the thumb nick just looked odd to my eyes at first, but now I love it.

The cap lifter (bottle opener) has a thumb nick and works very well as a beer bottle opener and the end can be used as a flat blade screw driver if needed. It’s also good for opening letters and boxes, bearing in mind how sharp the actual blade is then this is a safer option.

The blade is on the same side of the knife as the oval metal inlay of the Case Logo. The amber bone scales add a vintage look to the knife, that’s not a bad thing and the grip of the jigged surface does give a secure grip. The bolsters too add a touch of real class, at a shade over sixty quid in my opinion it is cheap for a pocket knife with such a fit and finish. I will be adding more Case knives to my collection, of that there is no doubt.

Many thanks again to Bruce and Richard at HH.