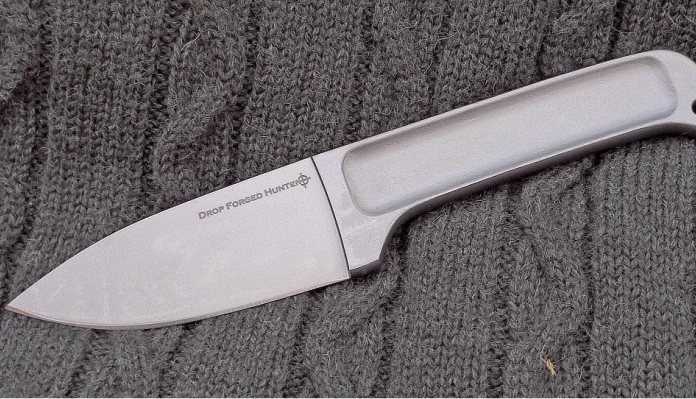 Anyone who has an interest in knives will be more than aware that the French have designs and concepts like no one else, a glance in any French cutlery shop is tangible confirmation.

Equally, when it comes to taking an existing idea and adding a whole new twist, few if any come close to Cold Steel. So when Lynn C. Thompson, the President of Cold Steel tried out a solid steel hunting knife for himself, then met Michel Achez, the French knife maker who’d designed it, the end result is collaboration between the two resulting in the Cold Steel Drop Forged Hunter.

Presented in a top-quality embossed, tan, saddle leather sheath, complete with a substantial, integral belt loop and heavy-duty stitching, it’s the out and out simplicity and feel of the knife that impresses. Manufactured in Taiwan and constructed from 52100 High Carbon steel and boasting a hardness of Rockwell 58-59, the champagne coloured knife has been conceived to be an out and out worker. The heat treatment the knife has undergone allowing Cold Steel to produce the unique colour, along with the resilient surface and fine texturing.

The benefit of the drop forge process has meant that Cold Steel has been able to produce a one-piece knife that has completely eliminated the usual amalgamation of individual components and their inherent weaknesses of cracking, rotting or falling apart. With an inherent high tensile strength, the grain of the steel running the entire length of blade and handle, drop forging also allows the knife as a whole a small degree of flexibility, albeit you won’t actually be able to see it. The benefit of this is when any form of leverage is applied, should you need to lever apart a large joint or be splitting a piece of wood apart.

With an overall length of 8 5/8 inches and weight of 9.1oz, the four inch continuously curved, drop point blade that features an almost imperceptible belly just before the taper, the handle forms directly where the quillon and finger guard starts. Elongated depressions for the handle’s grip, the design and texture meaning the knife is safe and secure to hold and use when dry, wet, cold, covered in dirt or blood and when wearing gloves. And before you ask, it works and works well, no matter what the knife or my hands were purposely covered in, holding onto and using this Cold Steel was never an issue.

Perfectly balanced just over an inch behind the quillon, the Drop Forged Hunter not only feels right but the style and mass gives the knife a purposeful sensation in the hand. It hefts extremely well and when required, moves and is directed freely, the overall effect being the unusual combination of both a large and small fixed blade all in one.

Being a Cold Steel it’s sharp and holds its keen, cutting edge. Over a two week period the knife sliced effortlessly through rope, jointed a few rabbits, gutted a small roe deer and to prove a point, made very short work of halving a joint of beef and of pork. Add in some gratuitous sideways pressure and cutting rough-hewn logs and the knife still showed no signs of stress, scratches or wear, the blade cutting as sharp as when it was first taken out of the box.

Cold Steel’s Drop Forged Hunter is by definition and looks an unusual knife and one that in many ways, looks and feels like no other. It’s unusually tactile and whilst the look is different, it works both aesthetically and practically. Likewise, once you’ve held and better still used one of Cold Steel’s Drop Forged Hunter you’ll quickly appreciate that the £110.40 asking price is actually quite reasonable, especially when you add the quality leather sheath into the equation.