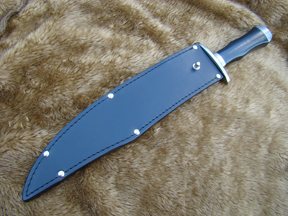 Who can forget that famous line from the film ‘Crocodile Dundee’ when the hero is threatened with a flick knife by a mugger, and produces his own giant bowie knife (pronounced boo-eey in the USA)… Well it must have impressed somebody, because it launched dozens of big bowie knives onto the market, most of which were naff in the extreme. Now that the majority of these hideous metal monstrosities are rusting away in garages, attics and garden sheds throughout the world…

This month we have a chance to look at the ‘Natchez’ a far better example of a contemporary bowie. It’s made by Cold Steel, an American company that prides itself on using quality modern materials yet staying with traditional designs.

This Cold Steel ‘Natchez’ is named after the town of the same name situated on the Mississippi (State) side of the famous river, right opposite Vidalia, on the Louisiana bank. In fact Vidalia hosts a Jim Bowie festival every year to celebrate the life and times of that colourful – yet nevertheless shady – hero of the Old West, and of course the man behind the original ‘bowie knife’.

At the beginning of the nineteenth century Vidalia and Natchez were at the hub of the cotton, lumber and slave trade on the Mississippi, so it’s not surprising that the area attracted everybody from Southern gentlemen through to river pirates and everything in between. Cold Steel proudly say that their Natchez bowie ‘takes its pedigree from those seedy taverns and dimly lit streets’ that formed a notoriously rowdy riverfront district of Natchez named “Under-The Hill” - famously written about by Mark Twain. However, all bowie knives can claim a link to Natchez and Vidalia, as a result of the famous ‘Sandbar Duel’.

The sandbar (possibly Vidalia Island) was in the Mississippi River and used as a crossing place between the two towns. It was on this sandbar (in 1827) that Jim Bowie - with various political allies and enemies - fought the famous ‘Sandbar Duel’ which was actually more of a general melee of onlookers following an unresolved duel. Nevertheless the ensuing ruckus resulted in the death of possibly six of the participants (two killed by Bowie) and horrific wounding of several others, including Bowie himself who had been cudgelled, shot twice, stabbed and run through with a sword-stick. James Bowie survived his wounds, emerging from the incident with a famous (or infamous) reputation as a fighting man, and having achieved iconic status for the ‘bowie knife’.

The Cold Steel Natchez is a modern take on a traditional bowie knife. It features a classic clip point blade, almost 12” long, made of vacuum heat-treated VG-1 San Mai III® laminated stainless steel. This ‘sandwich’ of hard high carbon steel between lower carbon more softer steels gives a perfect combination of properties; the centre layer is hard steel for a good edge, while the outer layers are more flexible for a tougher corrosion resistant blade. The blade is marked in black with the legend ‘Natchez Bowie’, with ‘VG-1 San Mai’ on the ricasso.

The handle is made of robust yet good looking black linen Micarta, with a rounded almost hour-glass shape that fits the hand nicely. The double quillion cross guard, bolster and pommel are all made of highly polished 300 series stainless steel. Yet despite the significant weight of the knife – nearly 1.5lbs - the substantial handle gives great balance.

The Natchez is supplied with a traditional black leather scabbard, stitched and reinforced with nickel-silver rivets. The scabbard doesn’t have belt-loops but instead features a solid nickel-silver bead, so that the knife can be carried Western style in your waistband or under your belt without fear of losing it.

Modern bowies are designed to be an all-round tool, that have to be capable of cutting, boring and chopping, as it would be expected to serve for all round use in the camp and field. The Natchez is supplied razor sharp, and its top notch materials and build quality suggest that it would easily take anything that normal use could throw at it – and a lot more besides.

This is undoubtedly a quality piece of kit, and if you are in the market for a large general purpose outdoor or expedition knife, the Natchez will undoubtedly fit the bill. However, I reckon that at nearly £350 apiece, most of these knives that find their way to the UK will be destined for collectors or Western re-enactors, and won’t be subjected to very much serious use…