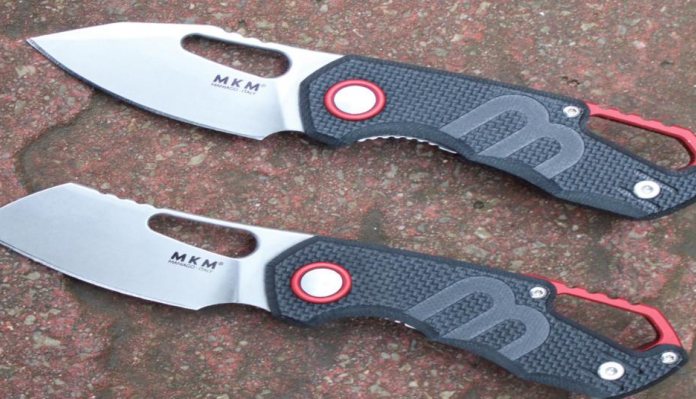 Heinnie Haynes are never one to rest on their laurels, and they have yet another exclusive UK legal carry version of a very popular knife. It happens to be by one of my all-time favourite designers, Jesper Voxnæs. The firm behind the two knives is very interesting indeed. It’s called Mikita and is actually a consortium of four of Italy’s biggest knife makers: Fox Knives, Lionsteel, Mercury and Viper. Jesper designed the small sturdy locking knife called the Isonzo for them. The name comes from one of the rivers running through the knife making area in Italy where the four firms are based.

They make many versions of the locking Isonzo knife, but Hennie Haynes worked with them to produce two UK legal carry models that do not lock. The two have either a Clip point or a Cleaver blade shape. Steel-wise they use a very modern N690Co stainless steel. The large trademark tapered thumb hole is all Vox design, his logo is etched on the right-hand side of the blades. The liner lock of the original design has been extended so it cannot lock, the tension induced means you cannot flick it open with one finger.

It also offers some resistance to closing on your finger. The aluminium back spacer carries on the tapered hole theme forming a useful carabiner hole.

It is anodised in deep red in the Hennie way. This red accent is also picked out on the large pivot washer on the left-hand side of the knife. The black G10 heavily textured grips set the red off, you know instantly it’s a HH special edition knife. They have an M cut into both sides of the already very grippy scales. The wire pocket clip can be positioned on either the left- or right-hand side but is restricted to tip up carry. The Cleaver blade has a useful finger choil which you can grip in conjunction with the four grooves on the spine.

The Clip point has three of these grooves and both have four grooves on the red back spacer carabiner hole. MKM give you a T6, T8 Torx key so you can change the pocket clip and carry out maintenance on the knife.

The knives are very light but feel very solid in the hand. Of the two I found the Cleaver more user-friendly due to the larger finger Choil. For UK users these are fantastic knives, another wonderful piece of collaborative work from Heinnie Haynes.

Many thanks to Richard and Bruce at Heinnie Haynes for help in production of this article.