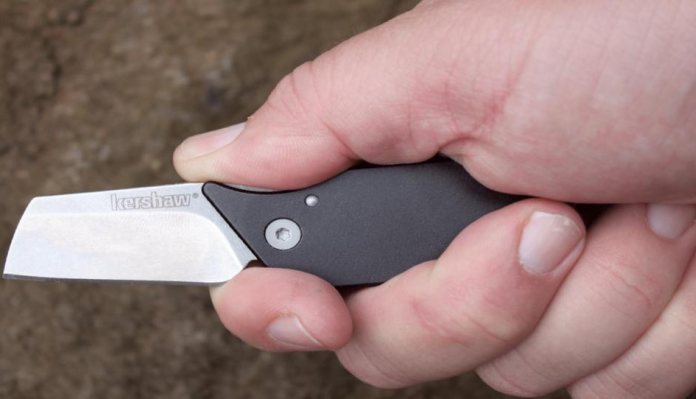 It’s rare to find a UK legal carry as unique as the Kershaw Pub, we all carry knives to cut stuff, open boxes and parcels, cut off plastic tags, peel an apple, open a packet of coffee, etc. The drinkers amongst us also like to open a beer or three. Also, it’s a bonus to be able to tighten or undo a screw. There are two minimum tasks any of my EDC (Every Day Carry) have to accomplish, cut stuff and open beer.

I love the name of this knife, the Kershaw Pub, Pub gives you a clue that it can open a brew. Designed by Belarusian custom knife maker Dmitry Sinkevich, the design is very clever. When it’s closed, you would not know it was a knife and had a blade. You see a largish steel loop and a bottle opener with a pry bar/screwdriver at the other side. One side has a coloured aluminium scale, anodised black or blue on the two base models, or made out of carbon fibre on the top of the line model.

To reveal the blade, just push down on what looks like the key ring attachment. The blade rotates out of the compact handle. Keep rotating and the blade will swing all the way out, ready for use. The blade is a modified sheepsfoot with a straight edge and clipped, rather than rounded tip. The back of the Pub is steel with a spring/detent system to hold the blade in place firmly when in the open or closed position. Closed, it is 92mm long, open it is 113mm long.

I found the blade very useful and the sheepsfoot design, sharp and big enough for a pocket everyday carry. It has nine grooves for grip on the back of the blade and the thing that looks like a shallow finger choil actually isn’t at all, it just aids in the one-handed opening process. I also highly rate the fact that it looks so nonmenacing when used in public. I have already had a copper scale made for mine. The large 20mm end means it can be hung on a jeans belt loop or key chain. It opens bottles easily with one hand also, the tapered pry bar end also makes short work of opening boxes, so you don’t even have to deploy the blade. For UK legal carry, this little gem is hard to beat. The slightly more expensive carbon fibre scale version looks stylish if you like a classier type of carry. For under thirty quid, they are all a real bargain. Snap one up, is my advice.

Many thanks again to Bruce and Richard at HH.