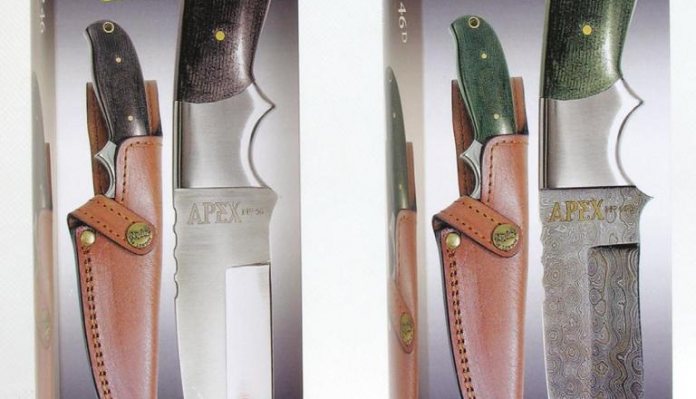 Napier of London, headed up by its owner and MD Steve Rowe, has gained a good reputation over many years as innovators of many shooting-related accessories. These include clothing, deer recovery and preparation equipment, a diverse range of gun bags and luggage and a host of gun cleaning and maintenance tools, along with air gun pellets and of course their VP90 solution used in all manner of ways. I’ve known Steve for a long time and he’s a keen hunter; a lot of his products come out of a practical need that’s either not properly addressed, or a solution waiting to happen.

So, when Steve told me at IWA last year that he had been designing a hunting knife, I was intrigued, not so unusual, but with the massive choice of blades out there why bother? What he wanted was a more traditional design that was not too big or small with enough heft to handle any gutting, skinning and butchering tasks, from Muntjac to Red Deer, along with a general use ability. The idea has been two years in development and with suggestions from hunters and experts within our industry and I’m proud to say me amongst them, late in 2018 the Model 46 was born.

In these days of the maximum uses of synthetics and automation in all products, the Model 46 is hand-crafted along more traditional lines and stylings. There are two versions, identical in every aspect apart from blade steel; the standard Apex Model 46 (Code 8906) using AISI 440c stainless and for those wanting something a tad more eye-catching the Model 46D in hi-carbon 5160 and 4340 nickel steel in the distinctive Damascus build. This, the first production, run is limited to just 150 units of each model worldwide and will be available from Napier stockists in the UK, USA and New Zealand from December 2018.

Research shows that the Damascus process was a form of pattern welding (continuous, heating, layering and folding) using a special steel called Wootz from India. It was, however, the Arab nations who popularised it from the third to the 17th century, with the weapon making industry of Syria giving it its name. It’s credited with great strength yet lightness and the ability to cut through nearly anything. Visually distinctive, with its unique patterns of swirls, the original process has been lost to time, with modern examples more admired for their look than ability, which is probably no better than current quality steels. It does stand out though and, with just a £20.50 difference in cost, I can see the Damascus being popular, given the initial short production run.

I tend to favour a medium sized blade and the Model 46 does not disappoint. The drop point shape is 5.25” long with a 4.25”, hollow ground cutting edge showing a 2.5” false edge, which aids penetration. The shape is very pointed and deep at 1.25”, which maintains its 3/16” width for 4.25”. Suffice to say, there’s a good bit of meat there! On top is heavy jimping that gives extra thumb purchase. The build shows a one-piece, full tang construction with stainless-steel bolsters that incorporates a finger choil.

The scales are Micarta (green on the 46D and grey on the 46), pinned on and wellshaped with a decent palm swell and flared base with a brass, lanyard liner. The handle is 4.5” long, which puts the 10.26oz weight more to the rear, overall length is 9.5”, making for a heavier build, which is a layout that will divide opinion, as lighter/shorter knives are often seen as adequate.

The sheath is made from premium quality tan leather, it’s a one-piece build with double-stitched and blocked seam with a brass rivet at the mouth and tip. The integral belt loop is 2.75” deep and retention is by a strap and press stud that sits over the finger choil. Inside it’s lined with a laminate proofed goat skin.

As I said before, initial impressions are of a heavier and longer build. The handle shapes well to the hand and offers a reasonable amount of address. Used edge-up, the thumb naturally sits in the finger choil and the base of the handle in the rear of the palm. The drop point reduces the chances of piercing the stomach when making the initial gutting cut, but, as always, care needs to be taken as to your angle of attack, as it’s also too easy to go too far.

My example was the Damascus model (46D) and the steel held a good edge, well up to doing a couple of Roe does without losing it too much. The long, pointed shape makes getting in around the anus easy to allow tube removal as you pull the guts out. The general blade dimensions and strength were useful when ripping up the sternum, yet fine enough for skinning. I have larger hands and felt that I would have like a bit more handle, even though the dimensions were good in terms of hand fit. The 4-slot jimping at the rear was a bit smooth and I would have liked it a bit more aggressive with more and slimmer slots. Napier includes a 10ml bottle of their honing Edge Oil.

I found the sheath very tight initially, but kept applying leather food, which expanded it after some usage and in and out drills. I like plastic liners as they do stop the knife cutting the sheath up inside, but to its credit the blade went in and out with no sign of damage if I was careful.