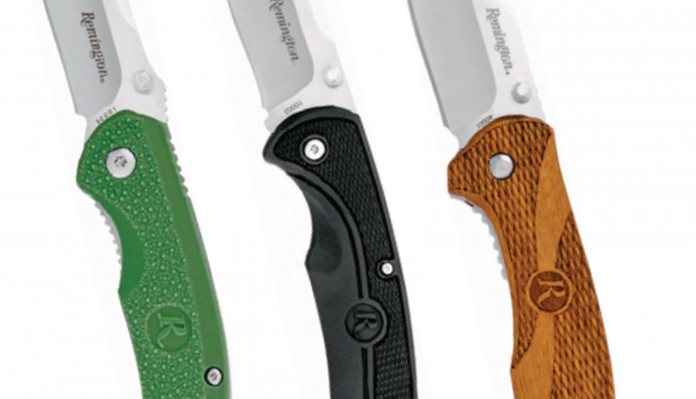 At risk of stating the obvious, ‘blades’ aren’t initially associated with many major gun manufacturers but there’s one company that have a surprisingly long association with them. That, of course, is Remington. Founded in 1816, Remington need little introduction, however, they also began manufacturing top-quality pocket knives in the early 1920s. Ever since their initial introduction, which included hunter inspired blades, such as the Jumbo Trapper, which became known as the Bullet Knife (due to its cartridge shaped handle) Remington knives have been prized for their functional design, quality and workmanship.

So, now to the series of knives available in the UK via distributors Whitby and Co. This relatively small, yet quite comprehensive and practical collection of ‘Remy-Cutters’, consists of two fixed-blade ‘sheath knives’ and four folders, one being a small folding pocket knife, but here I’m turning my attention to the dedicated hunter ‘folders’. All the knife blades are manufactured from 420J2 Stainless Steel, feature dual thumb studs for one-handed opening, have Stainless Steel pocket clips on one side of the handles and carry a lifetime warranty. Also, the handles of each specific model have a finger choil integrated into the build and all blades (except for the Sportsman Lock Back) have ridging along the rear section of the spine; this obviously aids grip and control when in use. A nice cosmetic touch, and personal to the company, is the familiar styling of the letter ‘R’ crafted into the centre of the handle plates.

First up, is the Remington Heritage Large (Liner Lock). Measuring 4.25-inches in the closed position and weighing 3.7oz; it holds a 3.1-inch Clip Point blade. It features chequered wood side-plates that not only make it feel good in the hold but also give it a very stylish and cosmetically appealing appearance. It has aggressive finger ridging towards the rear of the blade’s spine.

Next up are the two ‘Sportsman’ folders in the range, which differ in handle design and material, blade length and lock out mechanism. The Sportsman (Lock Back) measures 5.1-inches in the closed position, weighs 5.4oz and holds a 3.6-inches Drop Point Blade. The black reinforced nylon handle has a rubberised ‘non-slip’ coating; the outer of which is split laterally by having impregnated chequering above the lower section, which is left plain. However, the combination makes it ‘super grippy’ and for those needing a larger, non-nonsense folder, this is an ideal choice.

Alternatively, the Sportsman (Liner Lock) measures 3.75-inches in the closed position, weighs 2.3oz and holds a 2.6-inches drop point blade. The green reinforced Nylon handle has an impregnated raised dimple effect finish, plus is much slimmer than the Heritage ‘Wood’ option. Also, the rear of the blade’s spine is slightly raised, with finger ridging, which also continues a short way back along the front top side of the handle.