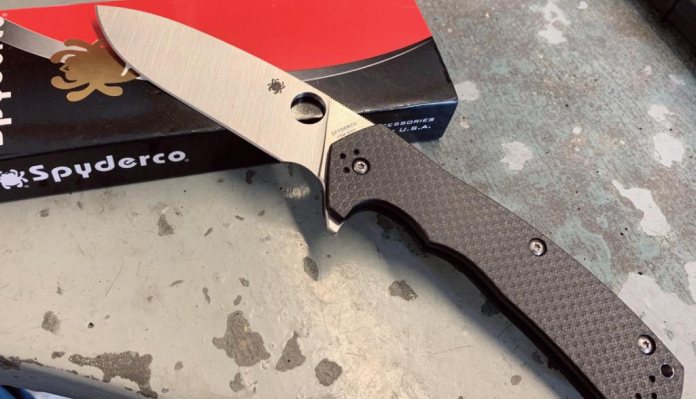 As a hunter, I always carry at least two knives; for gutting and skinning deer, I prefer a medium-length fixed blade, as it’s easier to clean, with no mechanism or anything else to go wrong. However, my constant companion for many years now, on all my hunts, foreign and domestic, has been a first generation Spyderco Military, which has to be my all-time favourite folding design. It doubles up on roles and I’ve used it on many deer and antelope, large and small; however, it’s also fine enough for game like rabbits and hares too, plus general cutting needs and, if push came to shove and I could only carry one blade, I reckon it would get the nod.

However, and saying that, something came over my desk recently that, if not replacing my beloved Military, could well make a useful alternative (don’t listen baby)! This young contender is Spyderco’s new Amalgam Pin, a medium folder with a big heart. Designed by mechanical engineering student and knife enthusiast, Brian Lai, he envisaged it as a practical and versatile working blade that incorporated modern features and a double opening system.

My initial impressions were split; firstly, it’s light at a mere 4.4oz, which is down mainly to the skeleton frame, combined with the Carbon Fibre/G-10 Laminate composite handle scales. Secondly, when I deployed the 3.8-inch blade it transformed this light folder into something akin to a fixed hunter. I’m aware that’s what folders do, but somehow the build and shape seems to re-enforce that feeling. So, let’s get to the nuts and bolts.

The broad and deep, drop-point blade is manufactured from American-made CPM® S30V® stainless steel. It shows a plain, 3.4-inch (un-scalloped) edge with a full-flat grind with a pleasing satin-like finish. It’s 1 1/8th of on inch deep at the rear and maintains most of that to just short of the tip; equally so, its 1/8th of an inch width, so strong and rigid enough.

There’s the signature, Spyderco thumbopening hole, which allows one-handed operation, backed up by a ‘flipper’ that forms the lower guard and forward choil. So, as you draw, your hand makes the grip and your trigger finger pulls back on the flipper in its closed position and with a flick of the wrist the blade is deployed and locked. Just to note; this is not an assisted opener. On top, at the rear, is jimping for added thumb purchase and the smooth action is down to ball-bearing washers in the pivot point.

Moving back, we have a top-mounted compression lock with an open frame, so making it both easy to clean and less likely for debris to accumulate inside too, always a consideration on a working folder. The handle is well sized and shaped, even for my larger hands and locks in securely. The carbon fibre/G10 composite scales are textured, so providing a bit more adhesion. At the rear is a hollow rivet for a lanyard, along with a strong, stainless steel clothing clip, that can be positioned port or starboard, forward or aft for your carry preference. For me, it’s tip-up, rear right clip for a right-hand draw.

Overall, a pleasing and practical design, the more rounded, drop-point style makes it versatile for general usage. Folded, it measures 5.10-inches and open 8.90-inches and, overall, it’s quite the ‘little big man’!