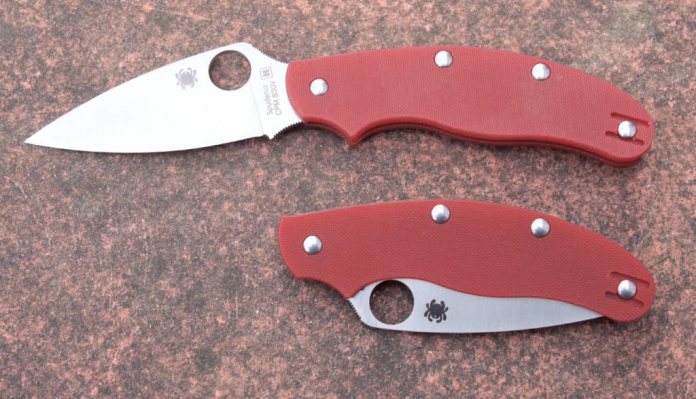 It’s safe to say that this Heinnie Haynes edition of a Spyderco knife has been eagerly awaited. Hennie Haynes is based in the UK and, as such, makes sure that they have the widest possible range of UK legal carry knives available. They even work with manufacturers to have knives made to their specification. One such top-end manufacturer is the world renowned Spyderco, they need no introduction from me.

The UK Pen Knife from them has been around since 2004. HH and Spyderco have made this, the HH UK Pen Knife, the best it can be. It has a full flat grind on the leaf shaped blade, making it more useful than the other Sabre grind UK Pen Knives. Another improvement is the addition of a second scale screw through the back spring, to further stiffen the action. Being a non-locking slip joint for the UK market, this is a very welcome. The G10 scales are in the trademark subdued red of HH edition knives, finished with a zig-zag grip pattern, which they call peel ply. The knife is made in Spyderco’s factory in Golden Colorado; they have this etched on the blade, along with Earth, and a sense of humour is good. It also has the H for Heinnie Haynes on the other side.

The knife has a pocket clip, although I have to say I hate the Spyderco wire ones, but that’s what we have. It has a left or right position, tip up. Blade steel is ultra-modern CPM S30V and is very sharp out of the box. Getting to the function of the knife, it has a 90-degree stop on the blade opening, making it much safer of the user. It also has very grippy jimping on the well contoured thumb curve on the back of the blade and in the choil area for the forefinger; it’s ambidextrous, of course, and has the iconic 12mm large round hole for single handed opening.

It’s not hype to say that this is an instant classic for the UK market, or any other country with restrictions on carrying lock knives; also, to the thousands and thousands of pure slipjoint pocket knife fans across the world, it’s proving to be very popular. It’s sure to sell out the first production run in no time but thankfully it’s not a limited edition; however, this model is exclusive to Heinnie Haynes. For an everyday carry knife in the UK, this is as near perfect as it gets.

Thanks to Richard and Bruce at Heinnie Haynes for help in production of this article.