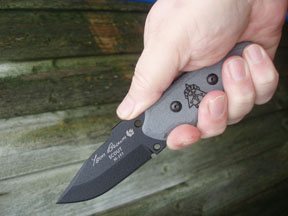 Although TOPS are noted for their tough outdoor knives, I’ve not had much chance to use any of their products, apart from the excellent Tracker, which was also the brain child of Tom Brown Jnr, the designer of the Scout. In fact even though the Scout is a good knife in its own right, it was originally intended as a compact companion to the larger Tracker.

First off, the designer, Tom Brown Jr., is probably America's most acclaimed outdoorsman, and a renowned tracker, teacher, author, and founder of the Tracker school. As such he knows a thing or two about bush/survival knives, and the Tracker is renowned as being one of the best – but what about the Scout?

Well the first impressions are good, as it’s made in a full tang construction based around a 1095 high carbon steel blade which has a textured black coating to help protect it. This blade is rigid and tough, being made from 4mm thick steel stock. The modified clip point shape gives a sturdy point and a 3.25” cutting edge – although TOPS point out that there may be some variation between each knife, as they are all hand ground and individually finished by craftsmen. The spine has a neat step and jimping (ridged grooves) – just forward of the handle – to give a good thumb or finger rest to give close control when doing fine or intricate work. There are two holes on either side of the ricasso, and another small section of jimping further back on the spine.

The grips are made of Green Linen Micarta Scales with finger grips and a lanyard ferrule at the base. White spacers are clamped between the scales and the knife’s full tang. Although compact this is an extremely solid knife and weighs in at 5.4oz.

The Scout comes complete with a moulded Kydex scabbard with a large heavy duty rotating clip for multiple carry options – on belt, pack or clothing.

Well capable of most cutting tasks that you might come across in camp, the Scout might be all the UK outdoorsmen/shooter might need, although in the USA it would probably still be regarded as a back-up to a larger knife. Each knife comes with a Certificate of Authenticity.