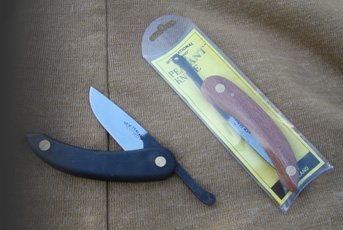 Moonraker Accessories sent in a couple of folding knives from New Zealand, and in the maker’s words “…the design is such an old concept that it’s new… and so new that it’s old”. They talk like that in New Zealand.

B.W. Baker, Master Cutler, felt that the idea of creating his latest knife range was calling to him from the past. Using old fashioned methods and relying on the oldest low-tech methods, he created the Peasant Knife. It is said to be based on knives used in Bohemia and Bavaria 300-400 years ago, but similar lugged-tang folding knives going back to the 2nd - 4th centuries AD, have been recovered by archaeologists.
During their heyday in the 18th-19th C these spring-less knives were called ‘penny knives’ – an indication of their low cost. All they had was a lug on the knife’s spine (just behind the axis pin), that would jam against the handle when the knife was open, so it would rely on cutting pressure and/or the user’s grip to keep it open.

Simple, But Well Made

It’s nice to see that this simplest of folding knife mechanisms has survived through the years in the form of this Svord Peasant knife, although there are several obvious improvements;

* The tang in this case slots partially back into the handle, making it far easier to grip and keep the blade ‘locked’ – the tang also aids one handed opening
* The 3” drop point blade is made of hardened and tempered high carbon stainless steel that will hold a really good cutting edge
* You can choose a handle made out of traditional hardwood or modern textured black plastic – they both seem to ‘grip’ the tang equally well
* The axis pin and bottom pin have a screw head that can be lightly tightened if the blade gets slack in the open or closed position

The knife has a 5” handle, and the knife is approximately 8” long when open and 6.6” (including tang) when closed. Weight is comfortably low at just 2.66 oz. There is no pocket clip, sheath or pouch, but there is a hole in the tang if you want to attach a lanyard.

As the maker succinctly states; “What does it do? Well, it cuts. Sure, there are knives around today that sprout scissors, sawblades, an entire motor mechanic’s tool kit, laser beams and micro cell phones. Such knives have lost the very reason for their existence - that’s high-tech for you. If you want a knife to cut things with, the Svord™ Peasant Knife is for you.”

I couldn’t agree more, especially as they have retained the essence of the ‘penny knife’ – an efficient cutting tool at a reasonable price; £14.95 plastic handle version or £20.95 for the hardwood.

A word of warning; these knives are extremely sharp, and unlike most folders they are at their most hazardous to the user after use, when you are shutting them, as the blade can stick as the handle momentarily holds it then slacks it grip and lets it swing back into the closed position. A slight lack of concentration here could cause an accident. So use both hands (one on the back of the blade and one on the back of the handle) to close the knife and make sure you don’t let your fingers or palm get in the way of the returning blade.