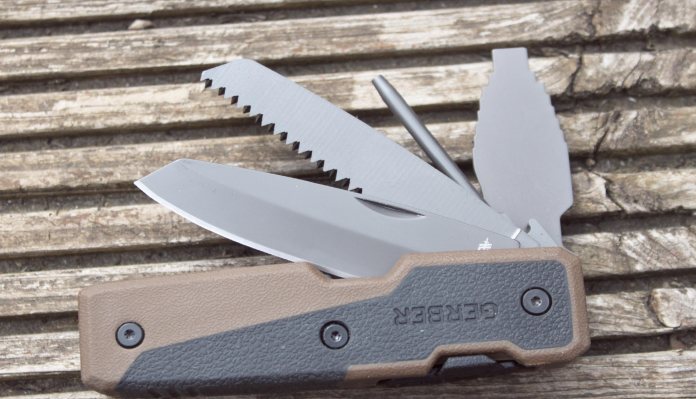 It’s good to see more and more firearms specific multi tools finally making their way to the UK. The Gerber Myth range of knives and tools has been well received worldwide. The shotgun specific Myth multi tool shares the same mudbrown colouring as the rest of the Myth series. I suppose it is sort of camo, but I still think it’s an odd choice for a handle colour; even green would have been better. The black section of the tool is very grippy rubber and there is a large spring-loaded unlocking slide/latch on the back of the Myth. Being shotgun specific it has a six step choke tube key ranging from .410 to 10 gauge, of course including 12 bore.

It also has a saw, a firearm disassembly pin and a drop point blade. All of these fold out from the body of tool and lock into place. The springloaded sliding latch has to be pulled towards the centre of the body to allow the tools to be folded back in. As well as the four steel tools you get a tape measure, which pulls out from one end. It must be an American thing as it is there for hunters to measure up their quarry in the field, Turkey’s beards and spurs etc. The tape retracts back into the body with a spring, it even has a warning red section near the end of the tape to warn the user not to pull out the tape too far. They also supply a bird-carrying web loop strap. This can be hooked over the folded in disassembly pin and the tool body then becomes a comfortable non-slip load bearing carry handle. As long as you make sure the pin is to the top I found it does work.

The drop point blade is 75mm long and sharp. It’s made out of 5Cr15MoV stainless steel, so will re-sharpen easily. Better still all the fold-out tools are Titanium Nitride-coated to stop corrosion. The choke key on the Myth is the best one I have used on any shotgun multi-tool, the key locks in the 90-degree position so the body can be used for leverage to remove those stubborn chokes, the fact that it locks makes it safer to use than some other fold out multi-tool choke keys which do not lock.

It is a relatively small package for the features it has, the highlights are the choke key (fantastic), the saw and the drop point blade, all of which I have used out in the field. It is really built to last with a stainless steel body hiding under the rubber coating. For winter or wildfowl shooters, the tool feels warm and remains grippy in the hands even when wet due to the coating. At 50 quid RRP some shotgun shooters may baulk at the cost but, believe me, once you begin to carry it in your shooting coat it will never leave.