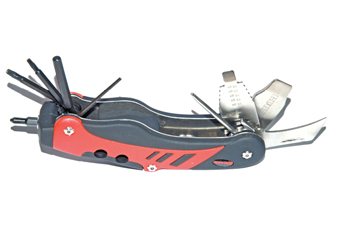 Multi-tools - we all own them and perhaps see them more as a general do-it-all design for the outdoors. With knives, saws and the seemingly mandatory pliers they are a neat piece of kit to have on you and I can recall a few times when they have got me out of a jam, a sort of Swiss Army Knife for the 21st Century!

However, what I have here is aimed solely at shooters as it’s undoubtedly a multi-tool, but far more mission-specific! Made by a company called Real Avid there are two versions on offer - The Gun Tool and the Gun Tool Ruger Edition, yes 10/22 and all that. In essence they are identical, with the exception of colour and a few minor functions.

Unlike the accepted multis the Gun Tools do not offer pliers, nor are they butterfly openers. The pen knife type build is 5 ½ x 1 ¼” with a metal frame and synthetic handles, grey as standard and red for the Ruger version. Common features include swing-out 3/16 and 5/64th Allen keys and T10 and T15 Torx drives (star drivers). On the reverse is a tool caddy with a hinged lid that holds small and medium Phillips and slot head bits, these pull out and fit into a magnetic socket at the end of the handle.

At the other end is a selection of swing-out tools, which is where the slight changes as to functions appear. Common is a pin punch - especially good for cross pins on the old Ruger 10/22 and semiauto or pump shotguns and a choke tube wrench. This consists of a flat blade that is tapered and stepped to allow you to fit/remove 10, 12, 16, 20 and 410-gauge chokes given they fit with a slotted-type rim. At the base is a medium, slot head tip. Finally a short, hooked (claw point) blade.

The only two differences after this is a T20 Torx driver on the standard Gun Tool Box and the mother of all slot head screwdrivers on the Ruger version. The blurb says that this is for the screws in Ruger’s dedicated scope rings and the large action screws on their M77 series of bolt actions: it is and it works too. None of these functions lock in position instead they are held by spring pressure like a pen knife.

In use both Gun Tools earned their money. For example I fitted a scope to a set of Ruger rings so the T10 Torx was used as was the big screw driver. I also tightened up a Zeiss rail mount using the T20 too and the choke spanner did the business, as did the plug-in screw driver heads. As all functions swing out you can use the handle as a lever if extra effort is required.

The only annoying aspect was the T20 driver was loose and kept swinging out when not required, so I had to go and find a small Torx from my big tool box to tighten it…