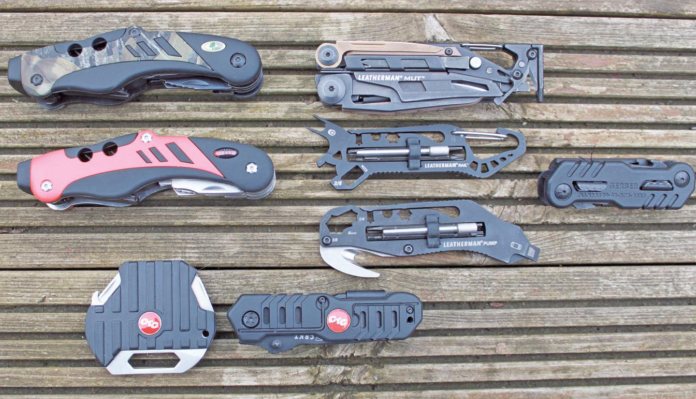 If you are a shooter then you will have some form of tool kit. Guns need maintenance and some guns more than others. Semi-automatic .22 rimfires need TLC to keep them running faultlessly. This is due to their firing cycle, as it is not as simple as a bolt action – a fired round has to be ejected cleanly and a new round has to be picked up from the magazine and fed without damage to the breech; in reality it’s not as easy as it sounds.

Now, I am part of the AR club I began to look at specific tools to help to maintain the AR rimfire I have. There are quite a few to choose from so here are some specific AR ones and some more general.

The Leatherman MUT, Leatherman Rail, Leatherman Pump, Gerber eFECT and CRKT Crimson trace Picatinny, CRKT RBT are all made by well-known firms in the multi-tool world. I also shoot a Rimfire Magic 10/22 style semi-automatic and there is also a tool for that made by Real Avid which I’ll review too as it can be used on either rifle, as can the Mossy Oak Gunsmith tool. I also enlisted the help of a Firearms Instructor in the British Army. He shoots and owns ARs among other guns and gave me his input.

Let’s kick off with AR specific ones.

I start with this as it was the hardest to obtain in the UK. I managed to get two for £100 from eBay but Amazon UK has them for £100 each. In the US they can be obtained for as little as $60. It is a very specific AR tool and in the smallest package of all the tools on review.

Introduced in 2008 at the Association of the United States Army convention (AUSA), the eFECT Weapons Tool was created for the distinct purpose of cleaning and maintaining an AR15/ M16/M4 variant firearm. Developed with direct input and feedback from US Military personal deployed globally, the eFECT incorporates components that make field cleaning faster and more precise. It’s compatible and interchangeable with the Otis cleaning components such as brushes, scrapers, picks and rods. It has six tools that fold out – three on each side. Side one has a fine pick, a flat screwdriver and a sight adjusting tool, the other a nylon brush, a pin punch and carbon scraper. All the tools lock out with a spring loaded sliding catch, it comes in a nylon pouch and is small and compact. Both the instructor and I like this tool a lot.

These three tools are readily available in the UK from decent suppliers. I have used a Leatherman MUT personally for a few years. It is a big multi-tool built around Leatherman’s folding plier system. There are a lot of tools on the MUT, 18 in total. Only two AR specific, a pin punch for disassembly and a bronze scraper shaped to the inside of a .223/5.56mm bolt. Don’t get me wrong, the rest are very useful tools, like a knife and saw – I take mine to the range every time I go. It is the most expensive tool here at £171, but the robustness and quality justify that high price tag. The design is faultless with all the tools and bits are stowed securely in the handles of the pliers. You can even lock the handles closed together if needed.
Cheaper Leatherman shooting tools are the Rail and the Pump. The Rail is AR specific as it has a front sight adjusting tool as well as a disassembly pin, the other two removable tools are a single bar with a Posi and a flat blade screwdriver bit, and a second bar with a 7/64 and T15 Torx bit; the same two long bits as on the MUT and all commonly found on ARs.

Our Army instructor liked the Rail and used it to adjust the front sight on his SGC .22 AR. The Pump is just for shotguns and has a choke tube tool and a gut hook. Aimed at shotgun hunters the Pump can also be used on ARs that do not have open post sights as it has a the same three tools as the Rail. They only weigh 66g and have a carabineer clip, this makes them very portable. Rather than staying in the range bag they are no trouble for the shooter to carry with them at the firing point. At the 30 pounds mark they are not expensive at all.

These next two tools are available from Heinnie Haynes. The CRKT CTC Picatinny is made in conjunction with the Crimson Trace laser company and is specifically designed for their MVF- 515 AR laser foregrip. The Picatinny tool features a 70mm serrated blade with an ejection pin, 8mm wrench, a scraper, hex bit driver with a small flat head, Phillips Torx 20 and hex 3/32 bits. The .028 and .050 Allen keys all made from 8Cr14MoV steel for adjusting the MVF-515 laser. It is very well made and has a pocket clip, and the disassembly punch needed for AR’s.

The cheapest tool on review is the CRKT CTC RBT. It has the same two Allen keys for adjusting CTC lasers as the Picatinny but is ultra-compact and has a small partserrated blade and flat and Posi screw driver tools and a bottle opener.

The Real Avid Gun Tool Ruger edition has 18 tools as does the MUT, unlike the MUT it also has a shotgun choke key. It looks like a large penknife and it has a disassembly pin, choke key (10 bore down to 28 bore and a driver for a Ruger M77 stock screw), knife blade and large flat blade screwdriver in a Swiss Army non-locking pivot point layout. It also has the Torx and Allen keys on a swing out system. The other side has a lid over a four compartment section holding 3/16-inch bits which fit in a magnetic holder on the end of the tool.

The Mossy Oak Gunsmith tool looks identical to the Real Avid Ruger tool, apart from being partially covered in Mossy’s own recognisable camouflage pattern. It has the same design and layout as the Ruger too, but is slightly more expensive. Gone is the very large flat blade made for the Ruger stock screw to be replaced by a T20 Torx bit. The Mossy Oak’s choke key goes from 10 bore down to .410 size, where the Ruger has a longer flat blade section for a Ruger M77 stock screw.

As the firearms instructor pointed out, once you have adjusted your AR front post sight it should very rarely need to be adjusted again. That’s why I can see why Leatherman did not fit one on their MUT tool. Bear in mind they are all American-made tools so any Allen key will be imperial, although the MUT Rail And Pump all share the same two double-ended long bits, including a T15 Torx. The T15 is also on the Mossy Oak, Ruger and CRKT Picatinny. The 7/64 Allen key shared by most of them is the size for B Square and other makes of scope mounts as well as other American-made stuff. If you want a cleaning tool the Gerber is the best. I think a small flat blade for adjusting optics is a must on any gun tool; all the ones tested featured one.

We both rated the tools in order of whether we would buy one. Our two selections were not the same, which goes to prove each shooter has to make their own mind up on the features they want/ need in a tool – he had the MUT at the bottom of his list and I had it at the top. The instructor’s top choice was the Mossy Oak, as he also has a shotgun and that has all the items he needs. As for my AR the MUT will stay in my range bag but the Rail will make its way into my pocket.

I also had Tom Walton, the most experienced shotgun shooter I have ever known, look over the tools. He instantly liked the Leatherman Pump tool and he even gutted a large hare with it to try out the gut hook – it works.

These are all very useful tools and there is something for every shooter, be it rifle, shotgun or general shooting. My thanks to Hennie Haynes (033 0300 0400 www.heinnie. com) for supplying all the Leatherman and CRKT tools.