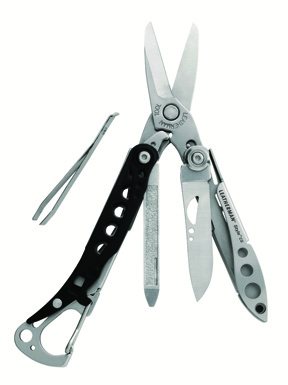 Small, keychain-sized multi-tools were once seen as novelties, but given they have the necessary functions and can do the job their compact build can be attractive. Common sense really, but some are now so strong and well built they work nearly as well as their bigger brethren. The only addition to your gear might be a sensible sized knife. I have here a selection from Leatherman – the Style CS and Squirt PS4 and ES4, all are butterfly openers.

The Style CS, measures 3” closed and 4 ½” deployed and shows an integral carabineer-type clip. It’s compact but functions are minimal and not very usefully featured. This is surprising, as it’s styled after the company’s minimalistic Skeletool or Freestyle, I feel they could have given more thought to the main tools it holds. The reason - no pliers, rather a larger than usual pair of strong sprung scissors. Ok, if that’s something you feel is handy but the clip point fine edge blade I feel cold be longer and more versatile as could the other tool it holds, that being a nail file with small flat head screwdriver at the end! The carabineer has the bottle opener integrated into its build and the now seemingly required ‘hidden’ tweezers are added for good measure. For me it says; ‘picnic time’ not ‘hunting’!

The Squirts are a whole different ball game. Though offering the same functions in the handles, you’ll choose one over the other because of the main tool it holds when opened. That being a sprung, needle-nose plier head on the PS4 or the multiple graduated gauge size wire stripper head on the ES4.

Besides these major differences, like the CS both hold a 420HC Clip Point knife, small strand wire cutters, scissors, medium screwdriver, flat/Philips screwdriver, wood/metal file and bottle opener. Both share the same dimensions of 2.25” closed, have a 1.6” blade length and weigh 1.9oz. In truth they are improved versions of earlier tools. Little wonder the ES4 has morphed from the now defunct E4 which was mainly sold in electronic stores. Knowing its potential they added scissors and for me it’s the ideal short lamping session accessory as the dedicated, main wire stripper tool offers 20GA, 18GA, 16GA, 14GA and 12GA clamp down size strip apertures in the head.

So as you can see, opt for the PS4 you are choosing a strong semi-compromise plier head over the ES4 which is a specialised and well featured, electronic repair-orientated design to have in your pocket. Personally the Style CS shows just what Leatherman can manufacture by way of build and design, plus those scissors and the handle layout do take some beating.

When you look to the Squirts the impetus to buy one over the other is clear cut due to what you want it for and what you will take with it.