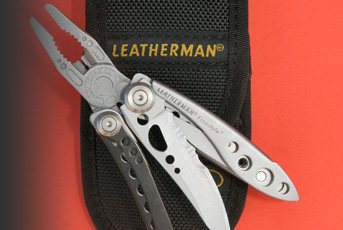 When Leatherman introduced their Skeletool the idea was to design a multi-tool that offered lightness, strength with only the most basic tools available. Taking this ‘less is more’ ethos further obviously presents the problem that there’s not much more by way of features to take away. However, Leatherman have done so in the Freestyle, which must be their most bare bones design to date. So does this minimalist approach actually have any value and if so why?

The Freestyle is made from stainless steel, weighs 4.5oz but is smaller than its closest relative the Skeletool, measuring only 3 ¾ x 1 5/8” at its widest point, in fact, when closed it resembles a robotic crab pincer! Due to the material used in the manufacture it still feels robust and is definitely a tough and uniquely attractive design. There are two options in the range - the Freestyle and Freestyle CX. The difference being the latter version has a carbon fibre handle insert instead of using Zytel as the standard model.

The Shape You’re In

Due to the shape of the design when opened the handles form a very natural ergonomic pairing that combine to afford a comfortable hold for operating the pliers with one hand.
The knife is the tool that Leatherman have also put much thought into by way of design and not just given us a standard fine edge folder.

Instead the Freestyle boasts a thick-set, 2 ¼”, part serrated drop point lock liner blade. When deployed this too feels solid in the hold. Weight has been reduced even on the blade as well as the body by various sized holes being drilled out of the tool at strategic places that don’t compromise the Freestyle’s integral strength.

Some may feel the Freestyle is just too basic and I would have to agree, certainly when compared to Leatherman’s exceptional Wave for example. But ask your self this; how many tool functions do you actually use in the field, despite the fact you carry around an all singing/dancing multi? Chances are it’s mainly the knife! In that respect the Freestyle is a very minimalistic product that offers more and takes up as little or even less room in the pocket than a conventional small pocket knife.

We Reckon:
• For: light and compact
• Against: more knife than multi
• Verdict: Perhaps more useful than it first appears