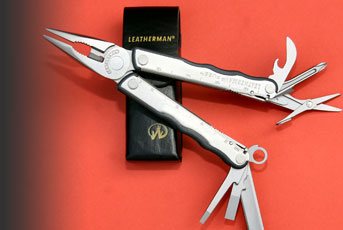 For those who remember such things, Leatherman have had great success with a middle of the range multi-tool known as the Blast. So much so it’s still in production, it’s popularity being due to its features and no nonsense, practical and solid build. I mention this as the Leatherman Fuse is built on a slimmer chassis than the Blast, yet comes with the very same time tested ‘sprung lever design’ locking blade system. Its slim handles have contoured Zytel inserts for a comfortable and sure grip, allowing you to easily operate its durable pliers and larger wire cutter with one hand even though it’s un-sprung.

Now to the specifications, features and tools the Fuse offers. Measuring 4” in the closed position and weighing in at 6oz, this slim butterfly opener folds out to measure 6 ¼” in length whereupon it reveals a pair of needle nose pliers, regular plier heads, wire cutters, hard wire cutters and wire stripper.

Like most multis, although I often don’t mention it because I presume you can see by the photos is a measuring scale or as they say at school - ruler. When in the open position you have access to the tools in the handles which are deployed by thumb nicks. These include small scissors, medium cross head screwdriver, bottle/can opener in one handle with a 2 ¾” clip point knife, small flat head and large (broad) flat head screwdriver plus a lanyard attachment point in the other.

In relation to many of their other multi-tools this makes the Fuse a basic, no frills design. However, that’s the ‘point’ of the tool as it offers the bare bones basic features many need and especially so at night if needing to effect a repair on lamping kit. Situations where you may need to change a fuse or cut, strip and re-attach a loose wire to a spade end contact or the like.

In that respect the Leatherman Fuse will do its duty and quality of build as you’d expect of Leatherman is of the highest standard. Though this tool is slim it still gives a solid grip if using any of its functions and thanks to the locking system no matter which one is deployed you are always sure of safe operation.

I’ll wind up with a question; are we not at times taking or requiring more from a multi-tool than we often need – a thought - like the Leatherman Fuse, it’s worth considering…