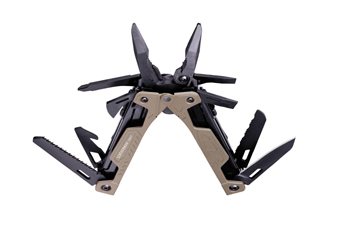 For many years if you wanted a top quality multi-tool you had two major brand options and two distinct design principles. The major drawback of both was you couldn’t have what is termed full, one-handed operation of the pliers function. Now Leatherman have managed to fuse these two popular and time-tested designs and produced what they call: “the first ever 100% one hand operable multi-tool, making this an industry first.”

Let’s see if the OHT is such a landmark design, or does it come with its own baggage? Obviously, not a butterfly opener the OHT features a slide-out pliers head similar in operation and design to the Gerber. However, Leatherman don’t claim they need a ‘flick of the wrist’ operation rather you only need push both locking catches inwards and the weight of the OHT enables it to drop down while the plier heads quickly and smoothly slides up and deploys, giving you the easiest access to pliers in a one-handed design I’ve ever used.

You have now deployed the spring-action, needlenose pliers, regular pliers and 154CM wire plus hard wire cutters, both of which have replaceable cutting edges. It’s at this point I noticed how more comfortable the OHT was in relation to some of the more ‘blocky’ looking multi-tools of this ilk. Closer inspection shows both the handles outer edges have a slight inward curved profile and are more rounded at the edges than similar featured and sized models in the Leatherman line-up.

Measuring 4 ½” in the closed position, the tool extends to 6 ¾” with the plier head slid out. It weighs 9.9oz.

All three knives are manufactured from 420HC Stainless Steel. These are a 2 ¼” modified fine edge clip point, 2 ½” serrated edge, and a 2 ½” wood saw. As you thumb these out the OHT again begins to show a distinct military look. I have on test one of the first civilian samples, but there are going to be military-only variants too. On the test model there is no Oxygen Tank Wrench or #8-32 Cleaning Rod Attachments but I’m sure the sporting shooter and hunter won’t feel they’ve lost out using the civvy version.

Some tools have elongated ‘thumb holes’ for opening while others have nail nicks. Don’t be fooled by the latter description as they can still easily be opened one-handed due to the generous and well designed indents in the handles outer frame. These allow you to put enough ‘side on’ pressure with thumb or forefinger to push any out. All lock out when deployed by a strong liner mechanism. An industry first initially seemed a bold statement but in my opinion this is a well manufactured, cleverly designed and thoughtfully featured multi-tool that’ll quickly gain popularity amongst Leatherman’s already comprehensive range.