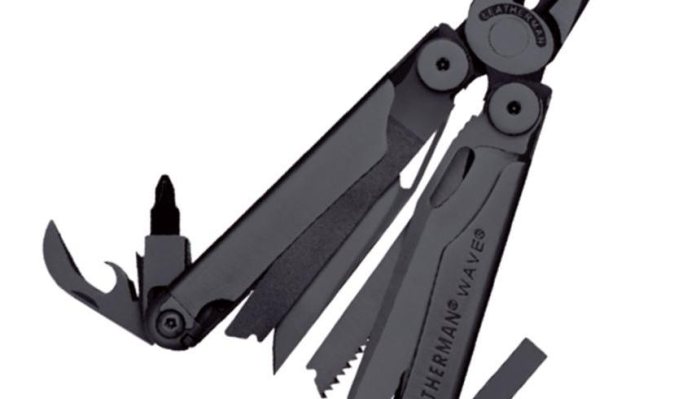 It’d be an understatement to say that Leatherman offer one of, if not the most varied and comprehensive ranges of multi-tools on the market. And as you’d expect, while some models are discontinued as technology and materials advance, certain models inevitably become superseded by one that is of a higher build spec’, or to be more in-keeping with what is expected of such tools today. However, the tool on test is a rare exception. I say this, because although the ‘Wave’ is still one of the company’s most popular sellers, the manufacturers felt it would benefit from a ‘makeover.’ In fact, it’s not the first time it’s been modified, as it had a major redesign way back in 2004. The result – a much stronger, fully featured and user-friendly butterfly opener, plus it still nicely fills a niche between less featured compacts and the larger tools that Leatherman offer.

There are now four models of ‘Wave’ to choose from – but as the black oxide models are ‘coated’ for protection, then you could say the Wave is a two-option model. You have the multi as featured here but in ‘natural look’ Stainless Steel, or another model, which holds a cap crimper – available of course in Stainless or with a Black Oxide finish.

That brings me to the ‘Wave’ we see today, which in my opinion has a noticeably heavier duty chassis to hold the equally rugged outboard tools; plus, it garners even more praise for the modified pliers, which now can exert a much increased ‘gripping’ power. Manufactured from 100% stainless steel, it’s a compact 4-inches in the closed position, 6¼-inches long in plier mode and weighs 8.5oz. Even though it’s quite broad and wide (across the closed handles) the Wave’s still relatively compact but so well designed that they afford the user a very assured sturdy grip when you’re using a tool.

When closed, you have access to four very strong blades and tool. These include a 3-inch long clip point knife, serrated knife, aggressive cut wood saw plus a heavy-duty diamond coated wood/metal file. They all deploy using thumbholes or lugs and solidly lock out using strong lock liner mechanisms.

Opening out the handles reveals the needle nose pliers, regular pliers and extra-long wire cutters with hard wire cutters and wire stripper. In plier mode, you can access the other tools from the handles, which are a large and small bit (flat and crosshead) driver, large flathead screwdriver, bottle/can opener, glass spectacle screwdriver, a pair of ‘sprung’ scissors and lanyard ring.

The Leatherman Wave is a very useful very strong piece of field cutlery, whose features have been cleverly considered, to make this a general-purpose usage model, as much as a true piece of dedicated hunter kit. We undoubtedly all ask more of our field cutlery these days and certainly when it’s in the top end of the scale – therefore it stands to reason the manufacturers of these tools keep abreast of changing trends and adapt their wares to suit. In that respect, the Leatherman Wave has certainly benefited from the attention the company have lavished on it, as it’s certainly a multi that should be given serious consideration.