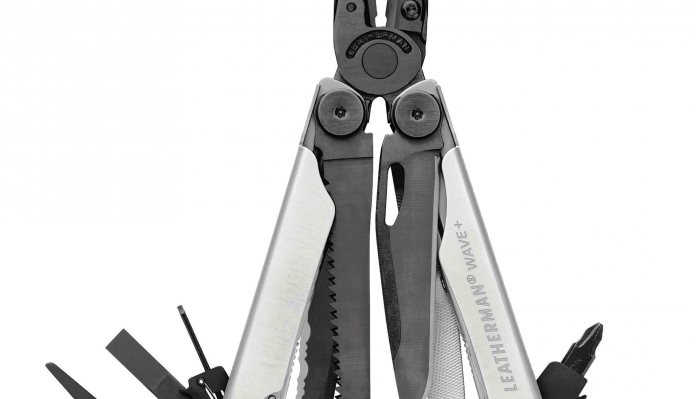 It’d be true to say that of all companies, US-based Leatherman offer one of the most varied and extensive ranges of multi-tools on the market. And while some of their models have been discontinued – relatively recently some have been upgraded and modified. I mention this because the original Wave has been on the company roster for many years and has now joined certain other longstanding models which carry the ‘Plus’ denotation to signify they’ve had a facelift and been given a little something extra. The result is a stronger, well featured and userfriendly butterfly opener that retains its place between their less featured compact models and the larger multis offered.

In fact, there are now three models of the Wave Plus, all equipped with the same tools, but can be dissociated from each other cosmetically as they are offered in Stainless Steel, Black and Silver and a fully Black Oxide covered option. While the first and third speak for themselves, the B&S model has a finish that comprises of a natural 100% stainless steel chassis and handles while certain other areas and all tools have a black oxide coating for protection.

At last that brings me to the crux of this review and that is the ‘Wave’ we see today, which has a noticeable heavier duty chassis to hold the equally rugged outboard tools plus it’s modified pliers can excerpt a much increased ‘gripping power.’

Manufactured from 100% stainless steel it measures 4-inches in the closed position, 6¼-inches long in pliers’ mode and weighs a substantial but not overly heavy 8.5oz.

Even though the tool is quite broad and wide when closed, the Wave’s still relatively compact but so well designed that they afford the user a very assured sturdy grip. In the closed position you have access to four very strong outboard tools comprising of a 3-inch long 420HC clip point fine-edge knife, 420HC serrated edged knife, aggressive toothed wood saw plus a heavy-duty diamond coated wood/metal file. All easily deploy using elongated thumbholes or lugs and lock outs solidly using strong lock liner mechs.

Opening out the handles reveals the Needlenose pliers, Regular pliers, Premium replaceable wire cutters, Premium replaceable hard-wire cutters and Wire stripper. It’s while open you can access the other tools from the inside of the handles. These include a large and small bit drive which hold the eyeglass screwdriver, Philips #1, 2 & 3/16-inch screwdriver bits (all supplied), spring-action scissors, can opener, bottle opener, Medium flathead screwdriver and lanyard ring.

As hunters and outdoorsmen ask and expect more of their field cutlery then it stands to reason certain staunch models in the company roster deserve to move with the times. In that respect the Leatherman Wave Plus has certainly benefited from the attention the company have lavished on it. This results in the Wave Plus still being one of Leatherman’s key models and also now apparently their bestselling one so little wonder it was chosen to be given the ’Plus’ treatment.