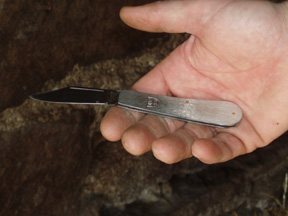 A lot of hunters and countrymen think that in order for a knife to be of any real value it has to be on the large side, and I must admit that I myself am quite a fan of a substantial fixed blade knife. But over the last few months I have started to wean myself of the big’uns and have begun carrying a smaller pocket knife instead.

The reason for this is partially because of the massive rise in knife crime up here in Scotland, which has some of the highest rates of knife crime in Europe. Therefore the police are very touchy around the subject of carrying knives, so to stay on their good side I only carry a big knife when I am working in the remote location where I live, and at all other times I now just carry a little Rogers pocket knife with a clip point non-locking blade of just 2.75in long. The entire knife is made from stainless steel, apart from the brass rivets that hold it together, and it sits beautifully in the hand being not much thicker than three credit cards.

This has to be one of the most basic knives I have ever owned, but that does not mean to say it is poorly put together, on the contrary, the craftsmanship is just superb, being carried out by a Sheffield based manufacturer that has been doing the job for a couple of hundred years. That’s right, this is one of those rare things… a British made product!  And we certainly need to support British engineering or it will soon all be gone.

Some may be thinking ‘what earthly use is a 2.75in blade’, and I must admit I had the same initial misgivings, but the blade on the Rodgers pocket knife is razor sharp - you could literally shave with it - so it is more than a match for whatever comes its way. I have legged, paunched and skinned rabbits with the Rogers pocket knife making extremely light work of these jobs. I have used (or should that be abused) this little pocket knife on my smallholding carrying out all manner of tasks, from shaping pegs to cutting thick rope, and it just gets on and does every job that is asked of it.

There is now no doubt what so ever in my mind that a small pocket knife is sufficient to meet most of my needs as a hunter and as a countryman, and when it comes to pocket knives Rogers of Sheffield really know what they are doing. Because the Rogers pocket knife is so thin and so light - as well as being completely legal - I take it everywhere with me.