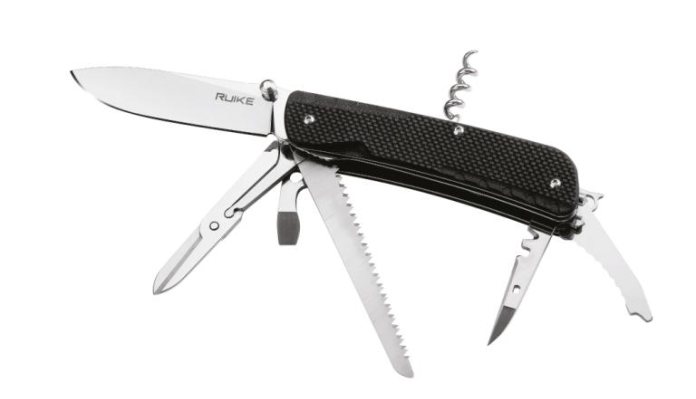 Ruike offers a relatively small range of Ruike Knives available in the UK, which consists of a few fixed blades, folding lock knives and a selection of multi-tools. The latter are not of the plier-type but styled along similar lines to the multi-function knives, such as Wenger (Victorinox AG) produce.

Their tools are all designated Trekker LD, with individual models given a numerical code after the letters LD. There are eight in the series, the most basic being a single bladed three-tool design, while the top of the range unit holds over 20! On test, is the Trekker LD42-B, which is one of the most feature-packed; so, as you’d expect of a ‘multi’ that uses a configuration where all tools (except corkscrew) deploy from the same side, it’s quite a chunky chappy!

All the LD range are the same length in the closed position (4.5”) and hold the same length and style of clip point knife blade and share certain characteristics and features. All show a pocket clip, hold a pair of tweezers and have a tungsten steel glass breaker. The knife blade is made of Sandvik 12C27 Stainless Steel and fitted with a generously sized thumb stud, which makes it simple and safe to open one-handed. Also, the handle side-plates are made from G10 - a blend of fibreglass and resin that gives excellent grip, is strong yet light and durable.

The LD42-B weighs 7.16oz and has an open length of 7.83” with the 3.35” knife open. This robust 0.12” thick blade is very much styled like a large pocket knife, but as mentioned, has a drop point cutting edge. The thumb stud is generously-sized and once deployed it’s held out securely with a strong lock liner mechanism (transverse locking strut behind the hinge point).

The tools are as follows: scissors, wire bender, bottle opener, large flat head screwdriver, bender, spoke wrench, reamer with sewing eye (with integral wire stripper), belt cutter, small flat head screwdriver, wood saw, corkscrew and as mentioned and common to all - pocket clip, glass breaker, key ring/lanyard hole and tweezers. I mention these again, as they emerge from a neat housing that runs in from the edge of the handleplate opposite but on the same side as the Pocket Clip. All fold-out tools (apart from the knife) deploy using thumb nicks or lugs and engage securely.

The more features a Trekker has, the thicker the body needs to be but, even this model is only approx. ¾” across; so, rather than feeling cumbersome, the frame affords a solid grip when using any tool and combined with the G10 chequered finish ‘scales’, always feels secure in the hold.

At risk of stating the obvious, the model you choose will depend on the tools you require, but such are the options I’m sure there’s a Trekker for you.