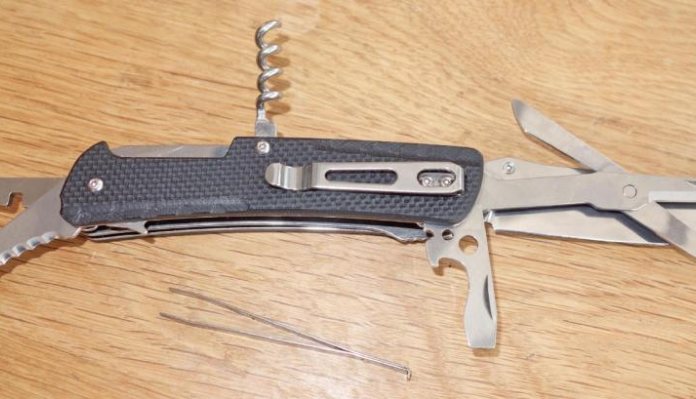 The classic ‘army knife’ was originally made in Switzerland, for, you guessed it, the Swiss Army! There are two companies (now part of the same organisation) that produce them and they are seen all over the world. However, it’s not just the Swiss who make handy, ‘do it all’ knives, as the basic design is just so useful. A pocket knife with various extra tools fitted has many uses, and one of the best I’ve seen for quite some time is the Trekker LD31-B from Ruike, via My Fenix in the UK.

Sometimes, it’s nice to have more than just a single blade available to use, so the Ruike LD series of pocket tools feature a host of useful tools along with the mirror-finished, plain-edged Sandvik 12C27 stainless steel blade that features a flat grind. 12C27 steel offers enhanced corrosion resistance and strength and retains a sharp, usable edge under harsh conditions. The knife utilises durable G10 grip scales formed from resin impregnated glass fibre that has a nicely textured surface for a sure hold even with wet or sweaty hands. The main blade opens easily using the thumbs studs and stops at the 10 o’clock position, where a little extra pressure then opens it fully; I like this feature, as it allows you to slightly alter the position of the knife in your hand as you open it, without the possibility of the blade snapping shut. A liner lock holds the blade securely while the knife is being used.

The tools are as follows: large blade, wire cutter, scissors, wire bender, bottle opener, large (6.5mm) screwdriver, wire stripper/ bender, wood saw, facer, anvil, wire stripper, spoke wrench, reamer, belt cutter, small (3mm) screwdriver, pocket clip, glass breaker, keyring and tweezers. That’s quite a selection and there’s more than enough for anyone! I like how the lanyard ring folds out if you want to fit some form of cord but as the knife has a belt clip, I reckon most people won’t bother. The Ruike Trekker LD31-B is very well made and a great addition to a toolkit or pocket. I’ve used a lot of the tools and they all do what they are designed to do and you can’t say fairer than that. What’s more, it’s very good value at £53.95.