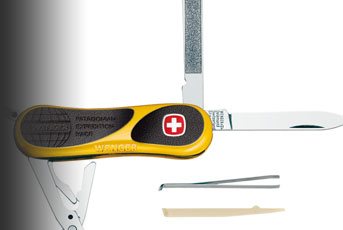 Wenger, have added another hardwearing multi-tool to their fast growing collection of premium knives - the Patagonia EvoGrip range. This new line takes its inspiration from their highly successful EvoGrip collection launched in 2008 which incorporates superior grip and handling with a selection of tool functions. There are three models to choose from, the small and standard EvoGrip P81 and P18 and the larger RangerGrip 179.

The P81 is very much designed for attaching to a key ring. However don’t think of it as a novelty because it feature a strong 1 ½” knife blade, ½” nail file/cleaner and a pair of scissors all accessed by thumb nicks. Also included are a useful pair of tweezers and a toothpick. These two fit into slots in the ends of the handles. All functions/tools are made from stainless steel and the hi-viz yellow handle scales feature EvoGrip inserts for a sure grip.

The P18 (3 ¼ x ¾”) is most like the original Swiss Army knife by way of features, form and function.  There’s a 2 ¼” knife blade, 2 ¾” wood saw, scissors, nail file/cleaner, flat screwdriver with wire bender and bottle opener, can opener, Philips screwdriver and the aforementioned tweezers and a toothpick. All tools, like the P81 are accessed by thumbnicks and lock securely in place. There’s also a larger split ring for lanyard attachment.

Last but not least is the largest of the trio - the RangerGrip179. Featuring most of the tools of the Wenger Ranger it still impresses due to build and size. Measuring 5 X 1 ¼” in the closed position, it extends to a full 9” with the knife deployed and a further ¼” when using the saw blade. The other functions include a corkscrew, awl (or reamer with needle eye), flat head screwdriver, wire bender, bottle opener, can opener and a large split ring is fitted for a lanyard.

The main blade is a one handed opening 3 ¾” long clip point and offers a combination edge with 1/3 being plain and 3/3 being scalloped. It uses their safety lock system, which is a heavy-duty liner engagement that is disengaged by pressing in the Wenger white cross red button logo positioned on the upper right hand side of the tool. Being larger the shape and size of the handle/grip is by far the most ergonomic for use.

You might feel that Wenger have simply re-invented the wheel with their new EvoGrip Patagonia range and are selling very similar products twice. To a degree you would be right as comparison to similar models in their portfolio look near identical. However, if you are drawn towards their build style and features the Patagonia adds yet more choice form what is an effective multi-functional design.

For: Useful series of pocket knives

Against: Very much re-inventing the wheel

Verdict: Well worth a look given you don’t already own similar and earlier examples of the design