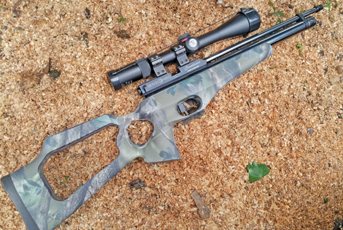 What’s in the box? ‘Camo-it’ comprises of a number of sheets of sticky-backed vinyl in your chosen camo pattern (from the Jack Pyke range), a craft knife, little alcohol wipe (pointless), a sheet of good instructions and some advertising blurb; all packed in a black cardboard tube. What’s not in the box? Rifle, Isopropanol, heat gun and talent and patience. At the core of the system is a thermo-forming adhesive vinyl, used primarily in sign making decals for cars, shops etc. For that read it gets flexible when hot! The guys at Camo –it started doing guns for a local gun shop and it all spiralled from there.

To give a good challenge to both myself and the product I chose to cover the skeleton stock on my little Brocock Contour XL. The detail and awkward shape off the woodwork should really test the kit. Having degreased the stock with Isopropanol, I cut the two large panels slightly longer than required and laid the vinyl over the top. The first thing to ascertain before removing the backing is whether the highpoints and troughs are too big for the sheet to stretch into and over when heated. Having not used the product I decided to start pealing the backing off and stick it to the highpoints, then heat it and push it into the holes and troughs.

TOO HOT TO HANDLE…

With the heat gun on its minimum setting the Vinyl very quickly became a super flexible skin around 40-50° C (according to the instructions), similarly with the heat source removed it went stiff in whatever shape it happened to be. This gave me confidence to ‘play‘ with it, and find the best way to get it to conform to the contours of the wood work.

The vinyl proved to be very forgiving in terms of removing, reheating and trying again. Once in place any bubbles were easy to squeeze out under a little heat; then the edges can be trimmed by folding them back to a crease where you want to cut and using the craft knife flat on the stock so as not to mark it. Finally in order to activate the glue and set the vinyl definitively you need to heat the finished covering to around 80-90° C . I don’t for one minute think we are all going to have a laser thermometer and as such the temperatures are a little irrelevant to the DIY’er

WHAT DO WE THINK?

Over all I was pleasantly surprised with both the forgiveness of the application process and the quality of the result. With the temperature restrictions I would have misgivings about covering a full bore barrel and moderator as under rapid fire the moderator in particular may get too hot. That said I believe ‘Camo-it’ is a credible alternative to dipping or painting as it has the key advantage of being removable and literally not leaving a trace, yet gives all the practical advantages of the other methods. As for durability only time will tell but I did a little stress test by scraping and impacting it and it held up well.