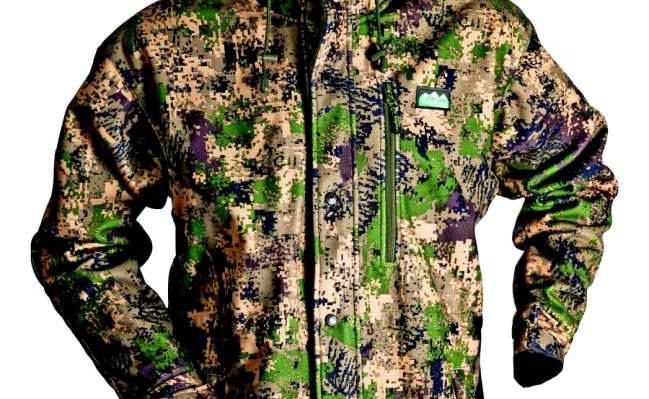 Ridgeline Clothing of New Zealand have more than made their mark in the UK since coming to these shores courtesy of UK distributors Highland Outdoors. But it’s the quality of their clothing that’s firmly established themselves as a company with a respected pedigree in the manufacture of high-performance outdoor wear. In that respect the jacket featured is a prime example of what we’ve come to expect of Ridgeline and upon using the Pro Hunt I soon realised yet again they don’t disappoint.

The Ridgeline Pro Hunt Jacket (available in Digital Camo and Olive) is made from one of the company’s own fabrics known as Southern Star 280™. This is a 280-gram bonded fleece material – the fibres of which create multiple air cells that trap warmth inside yet give excellent protection against even extreme conditions. This is further aided by its waterproof/ windproof membrane that fully blocks out the elements. It doesn’t retain moisture but allows it to evaporate resulting in both you and the fabric remaining dry. Also, all Southern Star Fleece garments boast fibres that have also been triple cropped – this gives the outer its plush finish and an extra bonus is it’s also silent in use.

It has what is described as a ‘Long New Zealand Style’ which refers to the length of the garment being longer than most average jackets, but this cut isn’t restrictive to movement due to it dropping slightly lower at the rear.

The jacket fastens with a heavy-duty doublezipper and press-stud down storm flap. A nice touch is although the double-lined hood is fixed, the front fastens all the way up to a high collar giving full neck and chin protection. The hood is one of the more generously sized so doesn’t feel obtrusive or claustrophobic, but should you require it being cinched tight to the head, strong toggle cord adjusters on either side cater for this.

Temperature regulation is further considered by the inclusion of zippered arm pit vents. In fact, more clothing manufacturers should take these types of features into account and not just rely on the material or more over the main zip status for regulating body temperature. Reason being it can be howling down and if facing into such conditions you don’t want to have to pull the zip down to help you release built up heat. With vents and zips positioned in key areas such as this then you have the ideal way to help cool off without getting wet.

Stowage is catered for via a collection of well-appointed pockets the lower ones are deep and have covered strong zip fasteners with pull assists. These include two side-pockets (internally they have opposing open top drop pockets) and a single vertically placed and spacious chest pocket on the upper left. There’s also a large PVC lined poacher’s pocket at the rear with twin side zipper access.

The waist has an internal toggle adjust drawcord and the arms have Velcro tab cuff adjusters which are strong, very easy to use and again offer more avenues for heat regulation and of course give protection from the elements.

Without doubt the Ridgeline Pro Hunt Jacket is a quality manufactured top, has a practical and functional design, is very comfortable to wear and offers a high level of protection. Add to that its very useful and versatile camo pattern and you have a very versatile and useful garment that’ll serve you well in the situations it designed for and obviously suited to.