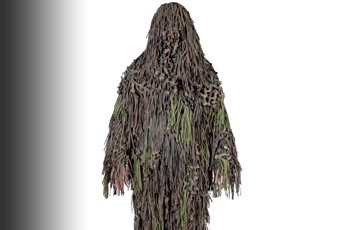 Unlike the traditional, one-piece Ghillie the JP version is a modular system. The suit consists of three parts - long jacket, hood and leg gaiters. Also you can just choose to wear the hood and jacket which in a majority of situations is all the cover you need.

The build consists of strips of coloured burlap over a light base backing of a PU-coated Nylon outer with a 100% Polyester liner. They look a lot like dreadlocks as can be seen. Set behind these is a covering of loose leaf camo. This gives a double layer 3-D look, which is highly effective.

The amount of burlap used is very generous, as is the cut. For example one of my friends is 6ft 4” tall and the jacket is long enough to cover his knees. The cuffs are elasticated and have long, Velcro, double-sided fasteners. Rather than being of a throw-over design, the front fastens with seven large green buttons. A nice touch is the button holes are all positioned under the loose leaf incorporated into the build.

This means even the buttons can’t be seen and it’s very easy to get into rather than squeezing an old fashion one-piece over your torso. There’s also a hanging loop at the rear of the neck as these garments need to be hand-washed only then allowed to drip dry!

Of the same build, the hood simply covers the whole of the head. When in place, a generous amount of camo mesh conceals the face, with the hood secured in place using adjustable tie cord and toggle with security being further enhanced courtesy of a button fastener at the lower front of the neck area.

The gaiters are tubular and the full material measures 23” long from the elasticated openings and Velcro strip fasten adjusters found at either end. But due to the long burlap strips this increases the cover to 28”. To wear them you do have to remove boots then attach one end above the knee and the lower end can then be cinched around an ankle.

This is a practical and useful total camo/concealment system. I tended to use the jacket and hood more than the gaiters, which are only required should you need full body cover.
Incidentally, the perfect ‘companion’ to this are the new JP Neoprene stretch fit gloves in English Oak camo. Get a pair of these to cover hands and with the more aggressive palm dot grips of raised rubber dimples, fold back/hold back trigger finger and Velcro wrist adjuster you’ll be more than suitably attired for getting closer to your quarry whether ambushing or stalking.

For: Excellent total camo system
Against: Some might see it as too dedicated
Verdict: It works and will suit the serious ambush hunters