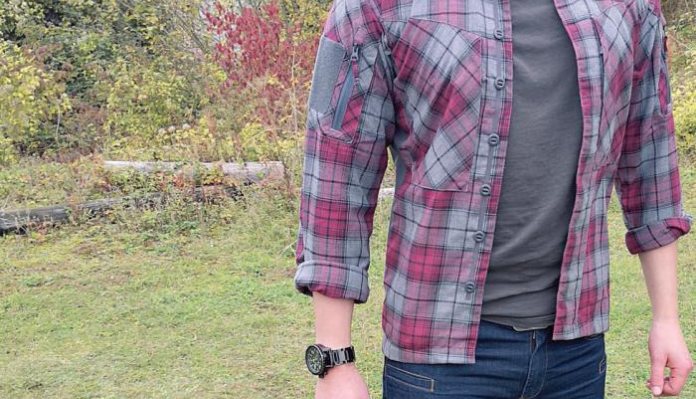 As with anything, shooting as an activity is having to morph and adapt all the time. More shooters are now opting to keep a low-profile, when moving to and from the range, yet they still demand practical well-made clothing. Helikon-Tex have taken on the challenge and have now added a selection of highly practical, civilian-looking gear to their range of tactical clothing.

The Helikon Modern Battle Dress Uniform (MBDU) Flannel Shirt can be found in their Patrol line of clothing, which is primarily aimed at military use, consisting of combat clothing and uniforms that incorporate a selection of camouflage patterns and colours. The new flannel shirt is an adaptation of their original MBDU shirt, which is primarily aimed at the military, and therefore does not necessarily suit civilian use. The obvious changes start with the colours and patterns available which include a choice of either a ginger or ruby plaid/chequering making it much more suitable.

The new shirt is manufactured from a lightweight and durable fabric that is soft to the touch and comfortable to wear. It has an anatomic cut, which provides flexibility and the freedom of movement to adopt the various positions used during dynamic shooting. This is enhanced with strips of an elasticated abrasion resistant material called ‘VersaStretch’, which extends from the ventilated mesh armpit to the bottom hem. Helikon have included antibacterial qualities to the fabric to increase durability and offer further protection to the wearer. It even has an Ultraviolet Protection Factor (UPF) of 50 for additional defence from the blazing sunlight! It is buttoned from the front using Canadian-style buttons, their larger size allows them to be manipulated while wearing gloves. Velcro is used to secure the adjustable cuffs and there is even a panel at the top of each arm that can used for patches and personalisation. Incidentally, both include a YKK zipped pouch next to them which complement the two larger zip fastened chest pockets.

The grey man is a term used to describe the deliberate act of behaving and dressing in an inconspicuous way, to avoid unwanted attention. A pair of jeans would normally help to do this but unfortunately their design and the materials used significantly limit freedom of movement, making them unsuitable for dynamic shooting. They have tackled this problem by using a stretchy fabric and including a crotch gusset, a piece of material that is inserted into the seam to improve mobility. Helikon have used denim and a standard dark blue colour to maintain a traditional look and then incorporated some subtle but practical features.

The belt loops are 50mm wide to accommodate larger belts, and the waistband is elasticated and secured with a YKK zipped fly and a large adjustable Velcro tab. There are two classic front pockets, with two additional smaller ones positioned just below them. At the rear is a large pocket on each side that has being split to accommodate AR15 magazines or a smartphone.