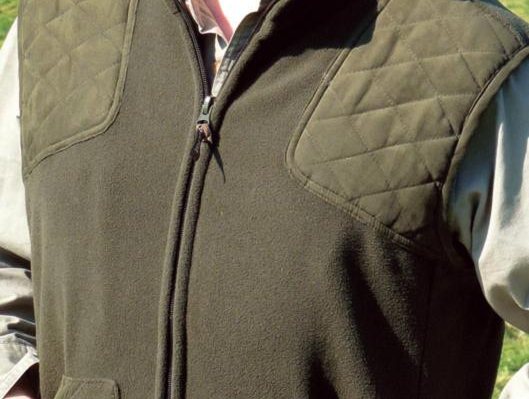 I think there can be few people involved in field sports who don’t own at least something with a Jack Pyke label on it; and their particular combination of practicality, durability, affordability and choice has no equal I can think of in the UK market. They’re always adding new items too, so I thought I’d check out some of the staple items in their huge range of country clothing…

I’ll start with a trio of fleece tops from the Shires line: a pullover, a gillet and a jacket. All are made from a heavyweight ‘Top-Tech’ fleece in a colour JP call Hunter’s Green. I like it – it’s not military-looking like olive drab, yet not too dark either.

Any of the tops can of course be worn on its own, but I’ve basically been living in the pullover and then pulling on either the gillet or the jacket over it, depending on the temperature outside and the task in hand.

Pullover,/h1> The pullover is the simplest of the tops, with no pockets, and a quarter-length zip at the neck, but there’s still a little overlap to tuck the zip slider into when it’s done all the way up, a comfortable ‘Suedlite’ faux-suede lining to the collar, and a shock-cord drawstring with toggle adjusters at the hem to keep out drafts.

The gillet complements the pullover nicely, matching it in material and colour, and having the same drawstring at the waist and Suedlite collar lining. The gillet also has Suedlite shoulder patches, which are diagonally quilt stitched, giving a nice touch of style as well as resistance against wear. You also get two lower pockets with Suedlite trim and matching stitching. These have a closed back and a semi-closed scalloped top, which restricts access a bit – I even managed to pull apart the back seam on one when trying to pull something out in a hurry – but clearly the design is good for stopping things falling out of their own accord! Then there’s a full-length, double-ended metal zip with a draft-excluding baffle behind it, which, along with the drawstring, provides flexible temperature control.

Finally there’s the jacket. This isn’t just the gillet with sleeves, though it has the same Suedlitelined collar and shoulder patches, and the same zip and drawstring, because the lower pockets are different, with vertical openings and zip closures. It would be nice to have a breast pocket or a phone pocket on the arm, but JP have clearly designed the Shires line to be as straightforward as possible, which is reflected in the price.

Comparing the cut of the three fleece tops shows another difference. Whereas the pullover is cut to be the same length all round at the bottom, the gillet and jacket are longer at the back and a bit shorter at the front, giving a little more draft protection when you’re sitting down, which is a good idea. All the same I’d have liked another inch or so on both, but then I’ve got quite a long back for my height.

This aside, I’ve found them very comfortable and generally practical to wear, and like their straightforward but quite classic looks… and, let’s face it, you’ve got to like the price too.

When there’s a chance of rain – and when isn’t there? – you could do much worse than to tuck Jack Pyke’s Technical Featherlite Jacket into your kit, or just keep it hanging by the back door. It’s made from Taslon Nylon, a durable but lightweight material that’s also waterproof and breathable. It’s not silent, but then it’s designed more as a general purpose jacket than with hunting in mind; though I often think that when it’s raining hard the odd rustle amidst the sound of rain in the trees probably isn’t much of an issue. Anyway, when it is raining you’ll also be glad of the hideaway hood zipped into the collar, especially since an adjuster at the back and an elasticated draw-cord around the face let you get a nice and snug fit. Meanwhile, the double-ended zip up the front is covered by a storm flap secured by Velcro strips, which is also used to adjust the elasticated cuffs, whilst another adjuster cord at the waist keeps things snug there too.

Outside there are two lower front pockets and another on the left breast, all with weatherproof zips, and inside there’s a heavy-duty mesh lining and a document/wallet/phone pocket made from the same material.

Unsurprisingly, I found the JP Technical Featherlite Jacket made an excellent top layer over JP’s Shire fleece pullover, gillet or jacket. Indeed, though I reckoned originally that I’d keep it in the back of the car for emergencies, I’ve ended up wearing it most days, whether there are dark clouds on the horizon or not.
The Jack Pyke Technical Featherlite Jacket is available in Hunter’s Green only, but comes in six sizes (S, M, L, XL, XXL, XXXL) and costs £56.00.

I’ve also been trying out a couple of gillets, or ‘vests’ from Jack Pyke’s Countryman. Both of them are available in Jack Pyke’s signature Hunter’s Green colour. Either would make a practical top layer whatever the season, but I feel their lightweight specification makes them particularly suited to use in warmer weather.

The lighter of the two gillets is the Countryman Mesh Vest and its design can be summed up in two words: ‘airflow’ and ‘pockets’. Consequently, it combines load-bearing and load-carrying areas made from heavyweight ripstop polycotton, with back and breast panels in heavy duty mesh for maximum ventilation.

As to the pockets, there are no fewer than seven front utility pockets of various sizes, all closed with flaps and Velcro strips. In addition, the five upper utility pockets all have elasticated openings under their flaps for extra security. The uppermost pocket on each side is the smallest, but it’s also high enough potentially to get in the way when mounting a shotgun. Complementing these are two stainless-steel D-rings, which come in handy for attaching lanyards for whistles, calls, etc. Below these are two slightly larger pockets on the left side, and one doublewidth pocket on the right. You also get a trio of three zipped pockets, two at the front (behind the largest utility pockets) plus a full-width rear pocket with zips at both ends.

The front can be done up with a single-ended polymer zip, or you can just hold the sides together with the stud-fastening sternum strap – a feature that comes in handy when you’ve got the pockets full and need to loosen things up a bit. There’s a braided draw-cord at the hem too, though I’ve never felt the need to use it.

Countryman Mesh Vest would be a good choice for those who need to carry lots of smallish pieces of kit, and want to keep them organised, but I wouldn’t say it’s designed primarily with shooters in mind.

The Countryman Hunter’s Vest, on the other hand, definitely is. Made primarily from heavy cotton canvas, in a darker green than most other JP items, its shoulders are reinforced with contrasting chocolate-brown Suedlite, which is also use to trim the two hand-warmer pockets. These in turn feature tabs with studs that clip on to the flaps of the lower front pockets, which are secured by additional studs at both ends. Of bellows-type design, each of these pockets is easily big enough to hold a box of 12g cartridges, and if you need more room, or even quicker access, or even if you just like the look, there are elasticated loops above them for a further six cartridges. I’ve found they come in handy for crow and predator calls too.

At the rear, meanwhile, there’s a full-width game pocket with open scoops at either side so you can easily slip your hand in, and a zip running under a flap along the top to make it easier to empty and to clean. This is a single-ended zip, but like the double-ended one that does the gillet up at the front, it’s metal with a brass finish.

The game pocket also has a nylon lining too. This covers the whole of the outer panel, but only runs about six inches up the back panel, which isn’t really far enough to avoid seepage into your shirt if you have more than a couple of shot rabbits or pigeons in there. This is a pity, since it prevents you making the most of this otherwise capacious carrying area. If I could change anything on this gillet it would be this area. Maybe in a future version JP could extend the nylon lining half way up the back panel of the pocket, and make the upper two-thirds of the outer panel from heavy-duty mesh, as this arrangement would both protect clothing underneath and help game cool as it was carried.

But if wishes were horses… so let’s get back to reality, because there are still a couple of good features of the Countryman Hunter’s Vest I haven’t mentioned, namely the presence of an inner pocket on the left-hand side that would do nicely for certificates, permission letters, etc., and a hem that’s scalloped up at the hips to make it easier to access your trouser pockets and curved down at the back to prevent drafts when sitting down.

Both vests have a lot to offer, and if kept loaded up with all your regular, essential kit would make an excellent grab-and-go solution for all those times when you just can’t wait to get out into the field!