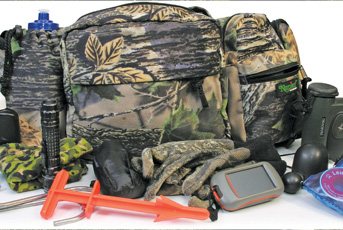 When you are hunting you do need a bit of support kit so a small day pack or bum bag will carry stuff like water, binos, radio, knives, ammo etc. However, once you have shot a deer, rabbits or birds they will need to be carried back to base, a good example would be the ubiquitous roe sack. This is where the Apex Predator comes in, as at first glance it looks like a multi-pocket waist bag, which it is.

A wide load pad with QD belt attaches round the waist (up to 60”), to this are attached four, zip-closed pouches (two with piggy back pouches) of various sizes along with an open-topped, draw string closed water bottle holder. This lot gives a generous 8.1-litres, so plenty of room for a day’s essentials. Zips have decent, extended pull tabs and all the pockets are lined and waterproof. The material is the original Realtree camo pattern in what Napier calls Hushtex silent fabric, which is like the old saddlecloth being smooth to the touch.

Big deal, another multi-pocket waist bag, well pilgrim that’s just 50% of the story. Undoing two press studs and a snap clip allows the Apex Predator to unfold and deploy into a full sized roe sack that measures 26 x 20” that gives a capacity of 46-litres. Essentially the various pouches are sewn to the base of the sack, which folds over when it’s not needed and can be deployed in seconds.

The sack has a removable/washable synthetic liner for the game, which press studs in place, a spare is also included. The top of the sack has a lockable drawstring, which to a degree will stop ticks etc from getting on to you as it’s pretty much closed off. Carriage is by a detachable Y-harness that clips to the top/centre and lower side D-rings, the belt also adds stability.

Rule of thumb suggests it will carry a large roe all folded up (do that while it’s warm) or a pair of muntjac or a good few rabbits or birds. Steve said it could also hold a day’s catch of fish. In use I have no real complaints as a bum bag it’s comfortable and access is easy enough as you can slide it round to the front as required. Two areas of stowage I feel have been missed are some bullet loops interior and more importantly exterior and a place to hang a knife.

As a roe sack it’s big enough and compared to some others comfortable, with the added assurance of the closed neck keeping the ticks at bay. Nice one Steve; you’ve done it again!