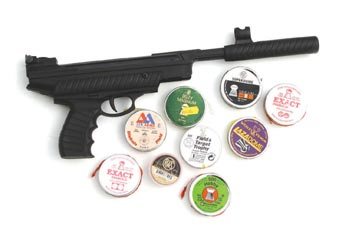 What a difference a year makes, Hatsan have hit the British market like a thunder bolt, offering very affordable yet really good air rifles and pistols alike. I first encountered Hatsan with their Striker model and was amazed at the accuracy and consistent power levels in such a bargain priced air rifle.

Well I am on a bit of a retro theme these days and began hankering for an old air pistol to plink with in the garden and around the farm. On a visit to Norman Clarks to pick up some bullets for another wildcat ammo project, I was drawn to a smart looking, brand new and reasonably priced air pistol on display.

The Hatsan Model 25 is available in several forms and in .177 and .22 calibres. This was the base model and available at £76.24, well who was arguing?  The deal was done and I had in my hand a cheap yet well made .177 air pistol with good balance, weight, Day-Glo sighting system, and a semi-recoiling system, magic!

The Hatsan Model 25 comes with targets, a metal pellet trap, pellets and barrel extension cocking piece as standard so everything to get you need to get shooting.

It’s not too large and sits remarkably square in the hand. At 14 inches long it is also not at all muzzle heavy and the 2.75lbs balances nicely. The stock is made from high impact polymer with a pistol grip that features three finger grooves and moulded in ribbing to both sides and back edge for grip.

The receiver is 7 inches and matt blued in finish and has twin dovetails of 3.5 inches long cut into the top, presumably for a pistol scope or better still a red dot sight. However the sights furnished are actually very good, the moulded black polymer fore-sight has a hooded cover with top section removed to allow light to illuminate the very prominent red dot Day-Glo centre dot. Similarly the rear sight has twin green Day-Glo dots either side of a squared notch for aiming with both windage and elevation being adjustable by knurled wheels.

The barrel is interesting too, shrouded in the same polymer as the stock it forms a ribbed exoskeleton around a steel barrel core beneath. Its 6.5 inches long with micro grooved rifling of a clockwise bias and crowned at the muzzle end recessed from the polymer shroud.

Cocking is a bit stiff as it is, as you have to force down on the fore sight. But Hatsan supply a 6 inch plastic cocking piece (which looks like a moderator) that sleeves over 2 inches of the barrel for a much easier cocking action. There is an anti-bear trap feature to stop the barrel closing when cocked if the trigger is inadvertently pressed.

There’s a manual safety slide just above the grip; push in to the right and the safety is on and the trigger cannot be pulled, to the left and you are ready to fire.

The two stage trigger is a bit creepy and heavy but actually you soon get used to it and at the price of the Model 25, I for one am not complaining. A semi-recoiless action is achieved with a polymer moulding which is permanently attached to the bottom of the receiver and slides about ½ inch on dovetails within the lower pistol grip. This ensures the top section of the gun moves back along the sight line to allow you to hold your follow through. A spring inside the body holds the top part of the action in the forward position. When you cock the pistol the top of the action slides back. On pulling the trigger you do feel a mechanical movement but nevertheless recoil is effectively and significantly dampened.

Ordinarily a couple of pellets to check accuracy would suffice for any back garden plinking airgun but I like to really test a product and so I tried a range of pellet types, weights, and styles to see what the Model 25 preferred. (see table above)

The Hatsan 25 energy figures in .177 calibre are mild but accuracy was surprisingly good at the 6 yards mark. Not all the pellets shot well or indeed fitted in the barrel! But certain ones stood out in the tests. The highest velocity went to the RWS Hyper Velocity which is no surprise due to their scant 6.0grains weight and interestingly came second in the energy figures at 3.32ft/lbs. Second highest velocity was the RWS Hobbies at 451fps generating 3.07 ft/lbs whilst the Defiant`s achieved 446 fps and 3.3 ft/lbs third highest in both velocity and energy. Interestingly the A A Fields (4.52mm) which were quite loose in the barrel achieved a good 419fps and highest energy at 3.35ft/lbs.

However, velocity and energy is irrelevant if accuracy is no good, so from the results I would certainly recommend the Defiant, RWS Hobbies and A A Field. All shot under an inch at 6 yards, with the JSB Exact and RWS Hypers just behind on 1.0 inch.

The Defiant`s shot good accuracy at 0.75 inches but did have a few fliers every now and again but good power levels. The RWS Hobbies shot 0.75 inch groups also with a nice velocity and certainly were consistent. Also a good choice would be A A Fields although a bit loose with the 4.52mm size they shot high energy levels with a good 0.85 inch grouping consistently.

For the money I have nothing to complain about, like all Hatsan products they do represent good value for money. The Model 25 in .177 calibre managed good accuracy. It’s easy to cock, load and shoot straight and if you are after a bit of fun plinking then the Hatsan 25 is a good choice and will not break the bank. GM